For many, today’s SUV, with its robust construction and large size, represents the union of tough safety standards for on-road travel as well as the rugged performance necessary for off-road adventures.

It’s no wonder that a manufacturing facility for one of North America’s most popular SUVs would use rugged assembly line conveyors for the vehicles’ construction. The company also uses steel frame automated guided carts (AGC) as both travelling assembly stations for the model’s instrument panel (I/P) subassembly process, and as the delivery conveyance for the sub-assemblies to the vehicle assembly line.

The AGCs used at the vehicle maker’s facility are an engineered hybrid of a system developed by Greer, S.C.-based Creform Corp. The carts are driven, routed and controlled by the company’s power units and guidance system while the stalwart welded frame, not typically used within the system, provides a sturdy, firm base for the various assembly procedures. Normally, the carts would be fabricated from the company’s series of strong yet lightweight pipes, metal or plastic joints, and hardware accessories. But these carts were fabricated for durability for a severe work environment.

“We built the carts with the heavy gauge steel framing for the rigidity that we thought would be advantageous for the assembly process,” says one of the manufacturer’s maintenance supervisors. “It turns out that the flexibility of the system, afforded by the ease of installation and the simplicity to modify and rearrange routes, is one of the biggest benefits we found with the Creform AGC system. And, though a single control unit issues timing directives, the fact that each cart is independently powered and capable of individualized responses to isolated commands, offers an additional level of agility that may be required to meet future production layout requirements.

“In the approximate 2.5 years that the system has been in use, its route has been altered several times. To change a route, one only needs to place adhesive-backed magnetic tape on the floor surface that a cart-mounted sensor follows. That’s the guidance system,” he explains. 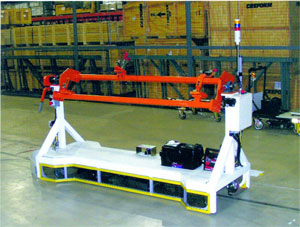 One of 10 Creform AGCs used in the SUV manufacturer’s assembly line. The AGCs are capable of individualized responses to isolated commands and follow a magnetic tape guide path.

In fact, the manufacturer recently moved the offloading station of the assembled I/P, where the unit is mounted in the vehicle on the main assembly line. And since the new location is working out well, the AGC line is being reconfigured with a more permanent installation, which involves etching the floor with 1/8-inch deep by four-inch wide channel, then placing the tape in the recess and covering it with a protective epoxy coating.

“Because the instrument panel carts must cross an extremely high-traffic aisle on its way to reach the main vehicle assembly line,” the maintenance chief explains, “the channel/epoxy mounting method offered a greater level of protection for the tape.”

Assembly required
The line now has 10 carts running during the two shift operations at the plant. The assembly process of the I/P consists of seven working stations – five are where assembly takes place, a quality control station is the sixth, and the seventh is the offload location. In addition, usually two carts with completed subassemblies are queued as a buffer, waiting for offloading while the 10th cart is returned to and prestaged in front of the first assembly station. The entire loop of the I/P assembly circuit is approximately 250 feet (76.2 m) long.

At the assembly stations, an operator installs specific components of the I/P in place, which may include electronics and gauges, driver’s controls and HVAC. After crossing the busy aisle, the I/P install operator on the main line uses a lift assist mechanism to offload the panel and place it in position in the vehicle’s passenger compartment. Currently, each operator is given approximately 4.5 minutes to complete their assigned tasks before the carts provide a warning signal, a safety delay, and finally move on to the next station in line.

At one of the stations along the route, Creform has placed what they call an “opportunity” charger where each cart’s battery is given a charge, automatically, every time through the loop. When twin photo sensors at the station and on the cart verify the presence of a cart is in position, the charger’s power leads are actuated and extend out to and make contact with the charging terminals on the cart. When the system calls for the carts to move, the charger’s leads retract from the cart and it proceeds to the next assembly station. In addition, a charging station has been incorporated near the line for reenergizing the batteries of the carts during the overnight down times.

The line’s traffic controller has two timers – one tracks the stop-time at each station and sends the warning and start signals, while the second controls the timing for the warning alarm (light and horn) and the activation of the queued carts at the aisle. When carts are positioned at the aisle crossing staging area, the alarm starts approximately 90 seconds (adjustable) prior to the anticipated cart movement. The timing of the cart crossing can vary in that the cart must receive a signal from the controller that the assembly offload area is clear of the previous cart. This all-clear signal is relayed when the I/P install operator finishes the offloading process and manually pushes the now empty cart’s start button, sending it on the return loop back to the start station.

Typically, all that is required to send commands to a cart is the placing of small pieces of magnetic tape perpendicular to the guide path and in various sequences. When read by the cart-mounted magnetic induction sensor, one of these settings may slow down the unit in preparation for stopping or turning, then a second tape command will halt the unit. In other applications, where multiple loops and destinations may be necessary, tape commands, like railway switches, can send carts around alternating corners.

For the SUV manufacturing plant installation, the carts are equipped with Creform’s FCH-A32 model drive unit. This series features forward only direction, a parking brake, and has a load limit of up to 350 kg (770 lb.), including cart weight. Dual travel speed ranges are provided with a normal operating rate of 24 metres (79 ft) per minute and a low speed of four metres (13 ft) per minute. A minimum turning radius of 600 mm (24 in) allows for floor area space-saving layouts.

For the assembly team at the SUV plant, the system has helped optimize the instrument panel build and the entire vehicle assembly process.

“The simplicity of the AGC system has allowed us to try several layouts, to stretch out the line and make adjustments where necessary,” the supervisor points out. “It’s as close to “plug and play’ as one can get, so there’s no constraints to implementing the modifications and improvements.”

Keith Soderlund is vice-president of sales at Creform Corp.