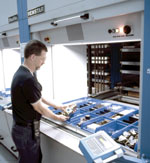 When BMW Manufacturing Corp. decided to introduce the world’s first luxury sport activity vehicle at its South Carolina plant, the X5 SAV, the automotive manufacturer knew it would have to expand its production and storeroom floor space. The company figured it would require an additional 900,000 square feet to accommodate the new models and increase in production volume.

“Even with the dramatic increase in production capacity and manufacturing flexibility, the plant’s existing 7,500-square-foot storeroom, [which housed] spare parts for manufacturing equipment, was not allotted any more space,” says Tony Brannon, coordinator, central operations support, BMW. “Although drawer cabinets, a pallet stacker and shelving were already nearly full, the room’s vertical cube was largely untouched. Making more efficient use of this cube would allow parts for new machinery to be accepted.”

To reach into the storeroom’s vertical cube, BMW installed five Remstar Shuttle 250NT Vertical Lift Modules (VLMs) side-by-side. The shuttle is a stand-alone, modular, enclosed system of vertically arranged storage trays, a workstation-type extraction platform and computerized push-button controls for part retrieval. With a 212-feet-per-minute vertical travel speed, it stores and retrieves a variety of component containers on specially designed trays, and delivers them to an ergonomically positioned workstation. Three of the shuttle units are 26 feet high, while two are only 22 feet because of interfering roof beams. To help equalize storage capacity per VLM, the shorter units are wider with wider internal trays. The company was able to install the VLMs while the plant was still in operation and without shutting down the storeroom, according to Brannon.

“The five VLMs replaced a length of six-foot-high, 35-foot-long shelving in a corner of the storeroom,” says Brannon. “The modules displaced little existing storage, however, because relatively few spares are held on shelves. The five VLMs, including a 42-inch aisle, consume only 363 square feet of floor space.”

To calculate the number of VLMs required, BMW performed an analysis, comparing them to standard drawer cabinets. The VLMs contained the same type of spares as the storeroom’s cabinets, plus some larger items such as VFD drives. The evaluation showed that each VLM could hold the contents of approximately nine cabinets. Including necessary aisles, 45 equivalent cabinets would require about 800 square feet of floor space-twice the space required for the VLMs.

“The Vertical Lift Modules automatically minimize tray-to-tray vertical spacing within the stacks each time the tallest item on a tray is removed and the tray is returned to the stack,” Brannon says. “In fact, the auto-optimization (CubeStar) feature was the single most important factor in the selection of these particular VLMs. Drawer-to-drawer spacing in cabinets is not readily adjustable.”

To justify the investment, BMW also calculated the dollar value of the floor space that the VLMs and cabinets consumed. Since storeroom floor space is as costly as production floor space, the economic incentive for extending into the vertical cube was very high, Brannon says.

With the added storage space, BMW’s storeroom is now able to accept spares for all of the plant’s new equipment. Should the company require more space in the future, it can add more VLMs quickly and easily.

The vertical storage units also provide enclosed protection for the densely packed trays of parts. When a BMW storeroom associate calls for a part, an internal elevator automatically lowers the correct tray to a waist-high extraction platform where the part advances out toward the associate for easy removal.

Tray-to-tray retrieval times for the VLMs range from 30 seconds to 32 seconds. Load capacity per tray is 590 pounds. Balancing the load is unnecessary, Brannon says, because the trays are chain-driven from both ends. 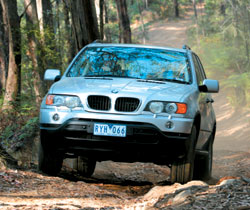 “Stored on the trays are items such as circuit breakers, push buttons, small hydraulic and pneumatic valves and cylinders, welding gun components, and air wrenches,” Brannon says. “Most are bolt-on parts supplied by machinery OEMs located all over the world. Of the storeroom’s 14,500 part numbers, 2,600 are presently carried in the VLMs.”

Heavy items with moving parts are often laid on rubber matting to minimize bearing or O-ring deformation from building vibrations.

Before and after each tray extraction, a light-curtain sweeps the tray looking for parts extending beyond the tray’s edges, as well as for parts that are taller than the last height the VLM detected and remembered for that tray. This information helps point out unclosed carton flaps, plastic bags that are sticking up and other storage irregularities.

BMW further maximizes storage density by minimizing part storage heights and by placing parts of similar height on the same tray, according to Brannon. “The company can adjust both the horizontal and vertical extraction speeds of each tray individually to reduce forces generated by heavy parts,” he says.