Freelance reporter Peter Fretty recently visited Madison, Ind., and toured automotive-parts manufacturing plants that have benefited from automation. One such plant, Arvin Sango, has a unique automation story: Almost every piece of automation equipment found in the factory was the idea of a shop floor worker who recognized a production process that would benefit from automation. The company says it encourages employees on the shop floor to keep in constant communication with upper management and share ideas for improvement. Managers take their employees’ opinions seriously, and often implement them.

In a business as complex as manufacturing, discussions on ways to streamline plant operations usually involve plant managers, chief executive officers, other high-ranking decision-makers and, when necessary, outside consultants.

But Arvin Sango Inc., a Madison, Ind.-based manufacturer of automotive exhaust systems and stamped components, is proving that sometimes the most innovative and successful ideas for improvement come straight from the men and women running production lines.

Since the company was founded in 1988, the production team has been involved in a kaizen program in which team members regularly brainstorm ways to improve operations. According to Scott Hubbard, general manager, operations, the company automated dozens of production processes based on suggestions from shop floor staff during these kaizen blitzes. Kaizen, which is a Japanese term, loosely means “good change.” Some companies hold kaizen meetings to discuss business practices with employees and look for better, more efficient ways of running operations.

“We have a unique level of stability that encourages [our factory floor employees] to stretch outside their normal boundaries and continuously look to improve their individual areas, whether through increased automation or other types of process improvement,” says Hubbard. “We have almost come to expect them to make recommendations and be an active part of the organization’s success.” 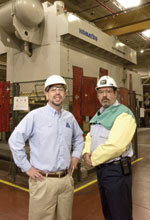 Nicole Browning, a production team member, agrees that the company’s orientation to its shop floor workers is unique. “[At] other plants I’ve worked for, [one] had to worry about being laid off and getting bumped to different shifts,” she says. “Other plants rarely have the direct communication with managers that we have at Arvin Sango. We [at Arvin Sango] know that if we want to make a change to improve our jobs, we can go through the kaizen program … [Sometimes] ideas are actually implemented by the member or members who come up with them, and management is willing to lend a hand if needed.”

Star Dupree, another production team member, echoes Browning’s opinion. “Employees are treated with respect and our ideas are taken to heart as we are the ones running production,” she says. “It is a breath of fresh air to know our opinions are respected and actually implemented. Opinions and ideas from the production work force are respected because who would know better than the operator on how to improve production and quality?”

One improvement idea that the company implemented involved the firm’s largest steel press. The steel press makes steel shells for one of Arvin Sango’s largest production assemblies. Shortly after the new press was up and running, production staff recognized that steel sheets were misloading far too often, and workers wanted to find a solution to the problem. “Knowing we needed to stop misloads was the easy part,” says Randy Lockridge, the company’s production manager. “Trying to figure out where it was coming from is where it got tough. One of our maintenance men came up with the idea to install a camera system to help us determine which end of the sheet feeder was causing the problem. Now, the vision system shuts the machine down when there is a problem to make sure that a misload does not cause line failure or excessively high scrap.”

Lockridge says his staff came up with the camera system idea during one of 50 kaizen blitzes they held to discuss the 2,000-tonne steel press. “It was typical of the kind of ideas we now expect from the talented people we have working here,” he says.

“We have doubled our GSPH (good stamps per hour), and gone from three shifts to two shifts,” says Lockridge. “In this specific example, daily downtime decreased by 70 percent, and misloads in January 2003 were 8,300-a number that by October 2004 dropped to only 15 [misloads].”

Another employee idea the company implemented was to design and build stationary stands that allow problem-free transfer of parts between dies. The employee came up with the idea during a kaizen blitz in which production team members discussed problems related to the plant’s automated substations. Each time the steel press would stroke, the original strands of the press, which were attached to each die, would bounce and misload. The staff member’s idea solved the problem.

Does that mean that all ideas are approved, or that each idea put into practice is a success? Not quite. But workers are rewarded regardless because, Lockridge says, the fact that his team is merely thinking of ways to increase company profitability is good enough. “Most of us learn from doing,” Lockridge says. “Most of the time, we don’t get [things] right the first time. But bad suggestions are the seeds for many great ideas.”

Peter Fretty is a freelance reporter specializing in automation and manufacturing topics. E-mail him at peterfretty@msn.com.