News
Travelling the road ahead: The 2009 Canada Manufacturing Survey

{nomultithumb} For the fourth year running, Advanced Manufacturing’s 2009 Canada Manufacturing Study — conducted by Manufacturing AUTOMATION in conjunction with the Excellence in Manufacturing Consortium and MFG.com — provided detailed insights into the manufacturing strategies, methods and technology in use in Canada. A total of 331 respondents took part. The results show, as they have in the past, that despite rough economic waters, most Canadian manufacturers are staying afloat.

However, this year, the numbers show a trend that isn’t unexpected: as product output has fallen, companies have chosen to keep product prices the same and held steady (meaning few planned expansions, but no significantly higher layoffs, either). The good news is that many organizations aren’t rushing to reduce spending on capital equipment and technology over the next year — and close to 80 percent of companies are implementing at least some type of improvement strategy.

Given this isn’t our first time running this survey, we have included previous years’ statistics that we will use to compare against this year’s results to see how the current economic climate is affecting Canadian manufacturers (page 16). 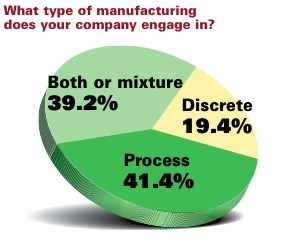 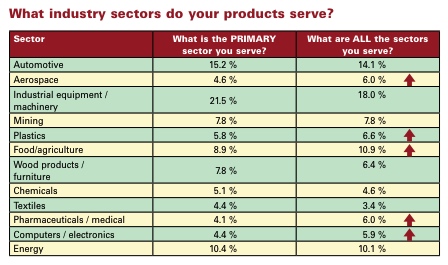 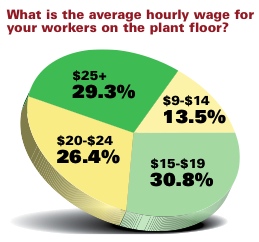 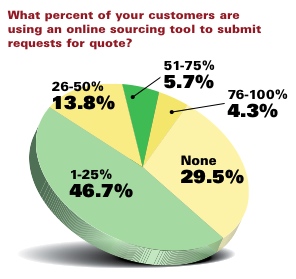 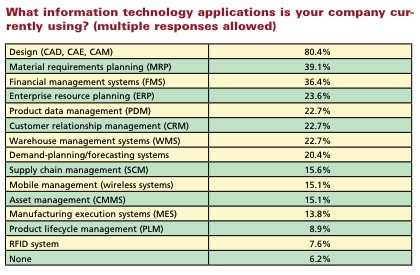 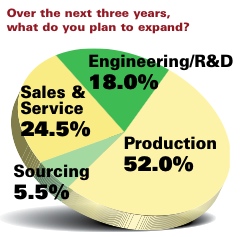 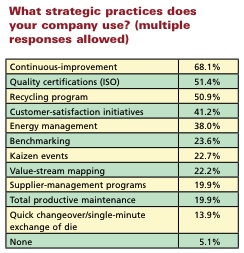 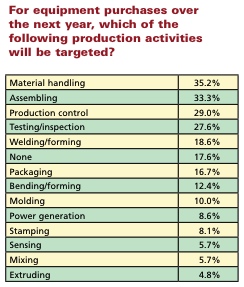 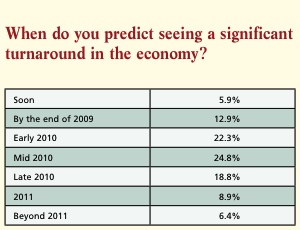 When do you predict seeing a significant turnaround in the economy?

Economists and politicians have given their two cents regarding the state of the economy, but Manufacturing AUTOMATION went directly to manufacturers to get their take. Given the unique economic uncertainties facing the Canadian manufacturing sector, we asked readers when they predicted their companies would start seeing a significant turnaround.

According to the study, a quarter of respondents predicted they will start seeing production in their facilities picking up pace by the middle of 2010. While some have declared the recession over, these results show that most don’t expect to feel the effects for almost a year. Overall, two-thirds predict a turnaround sometime in 2010. Close to a tenth of respondents are looking to the year afterward before they expect results — while a pessimistic few (6.4 percent) aren’t expecting positive results until even later.

“Sales volume per customer has declined for most of the sectors we service,” explains one reader, who sees early 2010 as the time for a turnaround. “However, our customer base has expanded significantly.”

Another respondent, who chose late 2009, says, “Last year was our best year financially, and more orders are coming in, so I expect the fall and winter months to be very busy.”

However, one survey taker — who didn’t see a light at the end of the tunnel until 2011 — was to the point with his response: “The only way we could be any slower is if customers started returning products.”

When examining this year’s numbers against previous years’ results, the numbers do reflect a negative shift in the direction of product output and end product pricing. As far manufacturing costs, they have remained steady, according to the numbers.

As for the price manufacturers are charging for their products, 40.5 percent have kept them the same, a dramatic increased from around 20 percent in the previous three years. Companies on the most part avoided giving their customers price increases and, in many cases, gave them a break. 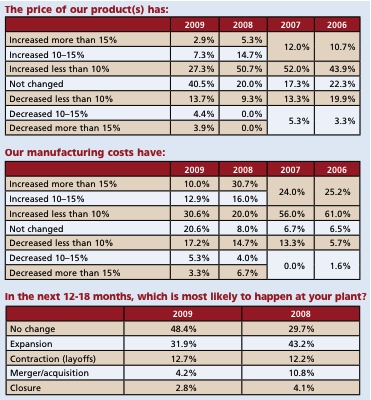 It doesn’t appear that respondents are facing higher manufacturing costs. More than half — or 53.5 percent — faced increases while in previous years this number was much higher.

And as for the moves companies anticipate making over the next 12 to 18 months, there were no significant increases or decreases when compares to last year’s number. However, organizations have decided to tread water: nearly half (48.4 percent) won’t be expanding or contracting at all this year, while planned expansions dropped to 31.9 percent.