Despite efforts by show organizers to put a positive spin on attendance numbers, National Manufacturing Week (NMW) Exhibition and Conference is showing its age. Once the “granddaddy” of North American manufacturing trade shows, gathering the who’s who of the manufacturing world, NMW appears to be in decline. Some exhibitors say they’re not too happy with the dwindling attendance and are considering pulling out. Others have already voted with their feet. 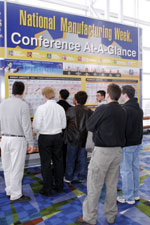 The 15th annual trade event, which took place at Chicago’s McCormick Place (March 7á†ž) featured more exhibitors than last year-1,198 companies from 11 countries, compared to 1,055 exhibitors in 2004-but drew noticeably less visitors. Show organizers could not provide official visitor attendance at press time, but it was evident by slow booth traffic that visitor attendance was lacking.

Still, organizers bill NMW as the largest North American manufacturing trade show covering all areas of manufacturing. The exhibition showcases the latest products and services available and provides an opportunity for manufacturers to meet new suppliers and hear from industry leaders and experts about key issues in manufacturing.

Many exhibitors who Manufacturing AUTOMATION met with commented on the low attendance numbers. “The quality of the people walking through [NMW] is an issue,” said James Bachle, electrical product manager, WAGO Corporation. “There aren’t enough buyers.” WAGO’s marketing promotions coordinator, Catherine Campbell, said that the company would likely not return next year.

Jon Bach, vice-president, marketing, Carlo Gavazzi North America, had a similar point of view: “The show is not what it used to be,” he said. Carlo Gavazzi, which has exhibited at NMW for the past 10 years, will most likely exhibit again next year, but that’s partly because the company is based in nearby Buffalo Grove, Ill., according to Bach. “If we were from California, I’d have to think hard about it.”

NMW attendee Robert Schowe, president, The Schowe Company, LLC, said the show was a “big disappointment” compared to the last show. “Last year, there was also a decline from the previous year, but since the economy rebounded, I thought [the show] would come back too, but I guess not.” 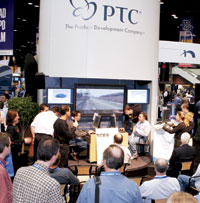 Next year, NMW will take place in Rosemont, Ill., at the Donald E. Stephens Convention Center (March 21á†«, 2006). The new venue is a five-minute drive from Chicago’s O’Hare Airport. Reed Exhibitions, the show’s organizers, say out-of-town guests will find the Rosemont venue more convenient because of its proximity to the airport, and that companies will find it cheaper to exhibit.

“[Our] independent research with exhibitors and attendees on a variety of topics relating to their participation in National Manufacturing Week [indicated] that both exhibitors and attendees alike wanted convenience, reasonable costs and a closer “community’ feel when participating in National Manufacturing Week,” said Kel Marsden-Kish, show director, Reed Exhibitions.

While some show-goers commented that the move to a smaller venue indicates that NMW is dying, other participants were optimistic about next year’s show.

“[The show] is smaller but better this year,” said show attendee Barry Van Name, principal, BVN Marketing Communication. Van Name’s firm represents several vendors that exhibited at the show. “My clients are already making plans to be back next year. I think this show will do very well at Rosemont.”

Nancy Kuyumcu is the managing editor of Manufacturing AUTOMATION.

All but two keynote presentations at NMW attracted small numbers. Day one kicked off with a speech by Alain Belda, chief executive officer, Alcoa. In his keynote address, Belda told the fairly packed auditorium that North American manufacturers will continue to compete against cheap imports, and will have to be flexible enough to follow customers in the regions where they grow. “Speed, flexibility, market knowledge effective alliances and acquisitions, and innovation will be critical success factors required to win in an environment driven by these mega-trends,” said Belda. 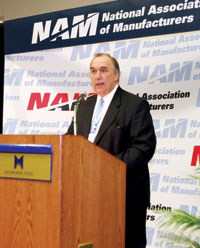 “Jobs today are going unfilled because manufacturers can’t find the right workers,” said NAM’s Engler. “One third of NAM members said they’ve got jobs unfilled because they can’t find skilled workers.” Engler predicted that the future will be more high-tech and added that not enough North American students are studying math and sciences. “We have to teach math and science and technical skills to awaken [young people] to the expectations of future employers.”

Another keynote presenter, James Champy, chairman of consulting, Perot Systems, gave a lively and engaging speech about managing in a “more-for-less” economy. He said today’s marketplace is marked with intense global competition and that manufacturers are under extreme cost pressures driven by higher productivity expectations. He added that the Internet has made customers more knowledgeable and demanding, and as a result, they expect more for less. To compete in this environment, manufacturers must be low-cost producers, and the way to do that is through innovation and by leaning out business processes, he said. “I think we are at a point in time when technology remains underleveraged,” Champy said. “Look at the automation industry: productivity doubles every 28 years. In other industries, [that rate is] even slower. So we are just beginning process and work changes that will improve productivity.”