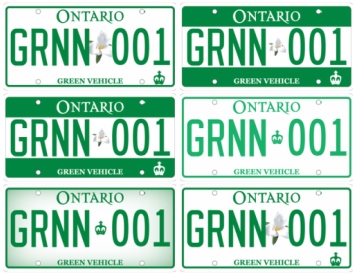 Ontario’s target is to become a world leader in building and driving electric cars.

The Government of Ontario aims to have one out of every 20 vehicles driven in Ontario to be electrically powered by 2020 – and it’s using rebates of between $4,000 and $10,000 do to it. If they reached those targets, it would put Ontarians into cleaner, more efficient vehicles, and expand the electric vehicle market for manufacturers. Expanding the use of electric vehicles, the government says, will help create and sustain jobs in the auto sector and put Ontario at the forefront of the new green economy in North America.

“Electric vehicles are the way to go in Ontario,” Ontario Premier Dalton McGuinty echos in a statement on Wednesday. “This plan helps get more people behind the wheel of a green vehicle to create jobs, reduce smog and equip Ontario for the 21st century.”

Representatives for auto and car-part manufacturers, such as Magna International and electric-vehicle maker ZENN Motor Co. (read a case study here), recently spoke at the APMA-AUTO21 conference about this technology being the wave of the future. The province seems to agree. As a result of the plan announced today, buyers of plug-in hybrid and battery electric vehicles will receive:

• Rebates of between $4,000 and $10,000 for plug-in hybrid and battery electric vehicles purchased after July 1, 2010.
• Green vehicle licence plates that would allow drivers to use less-congested High Occupancy Vehicle (carpool) lanes, even if there is only one person in the vehicle; and access public charging facilities and parking at Ontario government and GO Transit lots.

“The automotive sector is helping to build a greener economy by developing and producing electric vehicles,” Transportation Minister Jim Bradley said. “Our plan to help consumers buy green vehicles will benefit our economy and improve our environment.”

As well, starting today, the people of Ontario can vote on the design of the new green licence plates.