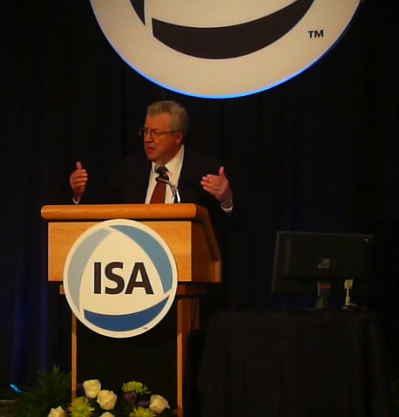 ISA EXPO 2009 started things off today with a keynote address presenting attendees with a problem that cannot be solved.

John Hofmeister, former president of Shell Oil and founder of the U.S. non-profit Citizens for Affordable Energy, in his Tuesday-morning address (entitled Energy Security and Affordability in the 21st Century), he presented to the packed audience “a problem that I don’t think you can solve … with respect to automation.” He spent a great deal of time bemoaning how the U.S.’s “political time” (two and four-year increments, dictated by election years) does not mesh with what’s required to develop and maintain energy policies, which are planned out in “energy time” (for which 10 years is short term).

According to Hofmeister, investment in the tradition energy base is the path to a competitive, affordable energy supply. He also said that while “politically correct” green energy is helpful and ideal, it’s inadequate for the demands of the future. He insists that in order to maintain the lifestyle to which Americans have become accustomed, carbon-based fuels cannot be phased out — at least not until the technology innovations needed to make green sources, such as wind and solar, as efficient as they need to be.

However, with the American government paralyzed by partisan bickering, he said only voters could demand a “coherent, pragmatic” energy policy. It is the reason he was involved in launching Citizens for Affordable Energy, which looks to educate the public that tapping internal oil and gas reserves is necessary to maintain the lifestyle to which Americans have become accustomed.

Until then, he warned, “as long as we have two and four-year politics, it’s going to get worse. There is no incentive [for political parties to] work together.”