The TwinCAT — The Windows Control and Automation Technology — software system is designed to turn almost any PC-based system into a real-time control system with multiple PLC, NC, CNC and/or robotics runtime systems.

With an estimated release date of December 2011, TwinCAT 3 features include: one software for programming and configuration; integration with Microsoft Visual Studio; support for the object-oriented extension of IEC 61131-3; use of C/C++ as the programming language for real-time applications; link to Matlab/Simulink real-time languages; open interfaces for expandability and adaptation to the tools landscape; flexibile runtime environment; active support of multi-core and 64-bit systems; and migration of TwinCAT 2 projects.

The vision for TwinCAT 3 was to extend the existing system, Stefan Hoppe, TwinCAT project manager for Beckhoff Automation, told Manufacturing AUTOMATION at the seminar. “We had historically grown engineering tools separate…We want to integrate that into one engineering workbench and make it easier and more efficient for customers to do engineering,” he said. 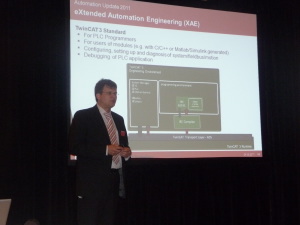 The company has been beta testing TwinCAT 3 in Europe since July 2010. For more information, visit www.beckhoff.com/TwinCAT3.