Features Opinion
Road rules: Lessons learned from the seat of my Norton 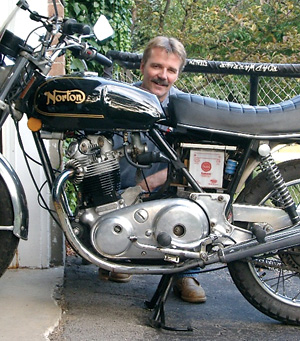 My favourite time of the year is fast approaching – motorcycle-riding season. I am particularly excited this year since, after being in pieces for six years, my 1974 Norton Commando is finally in one piece and ready for the open road again.

I also have a Honda ST1100, a motorcycle that does everything well and outperforms the Norton in virtually all categories – performance, handling, comfort and reliability. (In 60,000 kilometres on the Honda engine, I have yet to do anything other than change the filters and the oil. On the Norton, however, I am averaging 35,000 kilometres between major engine rebuilds!) But the Norton has indisputable charm and charisma, and something referred to by old bike enthusiasts as “character” (a term which I believe is a really nice way of describing all of the things other bike owners would call deficiencies).

Many blamed the failure on old designs, inflexible labour, bad management and unfair competition. These may have all been factors, but I believe that the British motorcycle industry was ultimately a victim of its success as well as its poor focus and vision.

ROCKY ROADS
Through the 1950s and 1960s, the British bikes ruled. There were others, of course, primarily American (Harley Davidson), German (BMW) and Italian (Ducati) bikes. But collectively, the British bikes (Norton, Triumph and BSA) were the world leaders. They saw their primary competition as each other, and believed their marketplace was mature, the market size and competition were known, and their business and profit models were established. The typical customer was a bit of a rebel, didn’t mind some inconvenience, and was a group they believed they understood well. Each of them (Norton, Triumph and BSA) had a two-cylinder parallel twin as their premier offering, with roughly the same strengths and shortcomings – that being that as long as each company believed it was slightly better than the other two, it considered itself to be the best. As a result, their business and profit models became very rigid; labour contracts were based on the economics of the marketplace they competed in for many years; research and development investments for new models or technologies were continually reduced; and little marketing effort was made to truly understand the expectations of their target customers. Because they were so successful for so many years, their focus was not really on the customer, but instead it was on themselves and on each other.

When Honda first threatened their position with a 450 cc twin (far smaller than the 650 and 750 British models), the British industry received the first warning of things to come. They chose to make management choices – two of the companies (BSA and Triumph) merged, operations were consolidated and models were spruced up. The threat didn’t seem to be taken all that seriously, as each company still appeared confident that it had the best product and that the small adjustments each made to its business model would suffice.

Then, in 1969, the motorcycle world changed completely when Honda unveiled its CB750. Suddenly, there was a bike that had electric start, a hydraulic disc brake, an in-line, four-cylinder overhead cam shaft engine that didn’t shake or burn or leak oil, purred like a kitten and would embarrass any stock Norton, Triumph or BSA rider foolish enough to engage in a stoplight showdown. The Honda 750 not only became the instant king of the motorcycle marketplace, it greatly expanded the overall size of the marketplace. You no longer had to be mechanically competent and willing to be inconvenienced and uncomfortable to own and ride a motorcycle. This motorcycle could be started, maintained, ridden and, therefore, owned by pretty much anyone who could drive. Honda not only re-invented the motorcycle, it redefined the market.”

The Japanese invasion could not be ignored any longer. The British industry consolidated into one company, added some of the Honda features to its existing designs and appealed to the British government for help. But it was too little, and it was far too late.”

DÃ‰JÃ€ VU
In many ways, this appears to be very similar to what we are now observing with the automobile industry in North America, and likely for the same reasons. The Big Three are victims of their earlier successes, and also of their lack of vision. Their business and profit models were entrenched when they collectively dominated the marketplace, and their focus was on themselves and each other, and not truly on the customer. They, too, had an early warning with the first Japanese invasion of the 1970s (Datsun, Mazda and Toyota), but they made similar management choices rather than leadership choices (i.e. downsizing, consolidating, sprucing up models and, of course, appealing to governments for help).””

As I wrote in my last column, I believe that leadership is the key for the North American automotive industry’s survival. One North American motorcycle manufacturer is a very good example of this. Harley Davidson faced the exact same challenges as the British motorcycle companies, but Harley not only survived the challenge, it thrived from it.

In my next column, I will take a look at what the Harley Davidson company did differently than the British motorcycle industry when faced with competition, and what the North American automobile industry can learn from its example.

Paul Hogendoorn is president of OES, Inc. and chair of the London Region Manufacturing Council. He can be reached at phogendoorn@oes-inc.com. For more information about the LRMC, visit www.manufacturinglondon.com.
Print this page

Related
Leadership in manufacturing: The government’s role
Survival of the most adaptable: Keeping pace is a matter of choices, changes and trust
Yesterday, today and tomorrow: The challenges of the decades
Manufacturing IT: Stuck in a rut?
Tags