Ayers Island is a 60-acre island located two miles from the University of Maine in Orono, Me. George Markowsky owns the island. He is working with the Town of Orono to turn the island into a place for high-tech development and security modeling, the process of using computer simulation to examine and monitor activity such as terrorist and biological attacks. The island will also be a residential and recreational location for the public.

Markowsky says he plans to use the land as a security test bed. His company, Global Threats LLC, is at the helm of the operation, which will include investigating natural disasters, crime and terrorism. The island will be equipped with a network of smart vision sensors that monitor island access. The first phase of the project, the company says, will focus on using artificial intelligence to screen vehicles entering the island. The smart sensors will read licence plates under a variety of conditions, including cars in motion and adverse weather conditions.

Markowsky says that during laboratory tests, the sensors scanned and recognized licence plates with 95-percent accuracy in the presence of noise with 50-percent density. Expansion into an agent-based computer system will eventually allow full monitoring of people movement on the island.

I met my friend George Markowsky in the early 1990s. We separately attended a series of lectures in Orono and in Santa Fe, N.M. We both share a strong interest in agent-based systems, chaos and the adventures of life. He has excellent podium skills and has lectured many times in Santa Fe upon my invitation.

George understands Powerpoint presentations must be mostly entertainment with only one or two important messages in them, so we don’t disturb sleeping audience members. He delivers the main points of his presentation slowly and coated with sugar. We always warn the audience beforehand that he’s a mathematician.

On occasion, George is chair of the computer science and math departments of the Orono section of the University of Maine. He has a strong linear education in math with a PhD from Harvard University. He worked at IBM for a while before escaping into teaching. He started his first company Trefoil to pursue his interest in software engineering and testing. In 1999, George partnered with the town of Orono to develop Ayers Island.

The island has been an industrial site for 170 years. Lumber and textiles were the focus during its heyday. When the island was abandoned in the early 1900s, many people offered to help turn the picturesque land into a place that would benefit Orono both culturally and economically. That’s when the Town of Orono approached George with the concept and the development project began.

George and I had many discussions about this project at a local Chinese restaurant in Orono. My comments during these conversations can be summarized as, “Are you nuts?” I thought dealing with town and federal agencies would be a nightmare and be a source of many sleepless nights for my friend. Return on investment-both monetary and non-monetary-would take a long time, I thought.

But I listened, mostly because he was paying for the egg drop soup. I also remembered that he’s a math and computer science professor, he runs a consulting company, he was president of the Maine software consortium and he gives lectures worldwide. He told me not to worry.

He took me on a tour of the island and cautioned me to drive carefully over the bridge. The old textile buildings were sturdy, but they needed significant work. The remnants of the railroad and the archaic 560-volt electrical systems were useless and the buildings needed rewiring.

In the end I was wrong. George is making his “intelligent island” adventure a successful project. Along the way, he learned a couple of things, he says. First lesson: There will always be somebody opposed to your project or idea–you could be handing out cancer cures and someone would object. Second lesson: People will spend more time trying to sabotage your project than trying to help you. 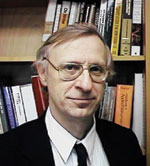 How did the good professor manage to get this project off the ground? According to my bride of more than 50 years, Shirley, George understands people (a skill lacking in her spouse, she says). The Ayers Island project is daring and challenging. It requires understanding, not of architecture and science, but of people. The long and tortuous path through governmental bureaucracy is a challenge for George, but it does not discourage him. My friend’s doggedness and lack of pretension deserve a Nobel prize.

The future for George involves continuing to rebuild Ayers Island. He has received many agency grants to help him do that. This year, he and I may also pick up where we left off in Santa Fe and lecture about chaos and predictive modeling.

He is also always welcome to speak on Geek Pride Day. This year’s gathering may be about turning pi into an integer.

Dick Morley is an author, speaker, automation industry expert and the inventor of the PLC. E-mail him at morley@barn.org.

Related
Designing for safety: Don’t forget about the invisible hand
Class is in session: A short history of wireless
Meet me in St. Louis: Morley takes on the ISA Marketing and Sales Summit 2011
Why can’t the big boys innovate?
Tags