Features Opinion
Beyond the leading edge: Technology in the new millennium

Welcome to the Y2K millennium. Whatever happened to the Y2K bubble? We seem to have more bubbles and hype than we need, and we worry too much. For instance, ants – like most of the animal kingdom – don’t worry; they deal with the present very well and solve their problems without stress. While we, the dominant carbon life form, worry about everything. We worry about politicians, weather, spousal infidelity and the price of gasoline. We seldom can improve anything with stress and worry.

Most of the talking heads on television tend to try to predict the future. It can be for the short term or long term. The weather forecast is for a week while presidential elections stretch out for years. And most columnists, such as myself, also make predictions, sometimes based on poor data, as there really is no data about the future.

In our business and engineering life, we are beset with predictions. We must make predictions about costs, time, production and sales. Engineers know that forecasts are wild guesses. Analysis of the future is a difficult task.

Let’s see how predictions worked in the past. I promise I won’t cheat; I will present both the good and the bad predictions. Let’s start with the year 1901 with accurate projections made in a Japanese newspaper column:

The not-so-correct items are as follows:

• green Sahara
• extermination of lies and fleas
• cultivation of by electricity of tropical plants in Greenland
• worldwide railroad and network
• natural disaster control
• animal language literacy
• extinct wild animals
• rubber-tired trains in the air and under ground
• everybody taller than six feet.

They seem to have gotten about two-thirds correct. Not bad for a 110-year-old projection. 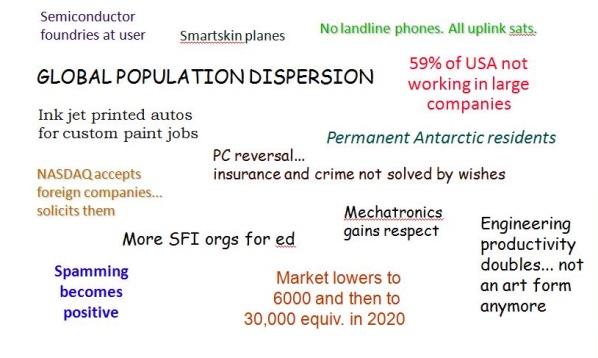 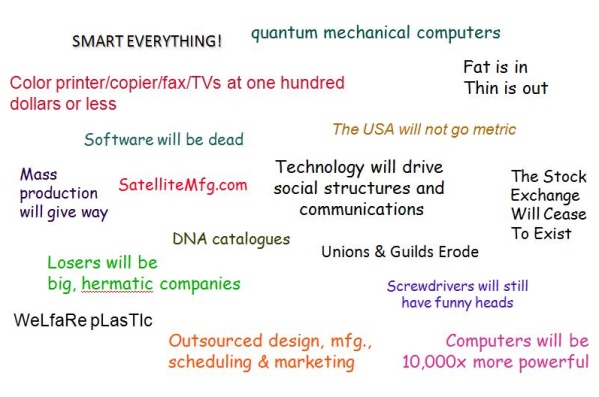 Now let’s look at some of the predictions I made in 1998, which are included above to avoid discussing them all. Most are obvious.

The forecast I laugh about is the one about printer costs. It was dead on. The mistake was that I did not envision the ink would cost more than the printer. Many readers will comment about the software forecast. I suggested software is not a business. Software is necessary but irrelevant. Applications are necessary. The interface between the computer and the human is a key element in all applications. I really don’t care what operating system is used for my global positioning device; it is irrelevant. It is necessary that I correctly put it on the windshield. It is unnecessary to understand the workings of this complex device.

"Smart-skin airplanes" require some explanation. Future airlines will use flexible wings and dimple the wings like a golf ball while in flight to optimize airflow. We have done this to golf balls for years. It’s about time applied it to aircraft.

I’m frequently asked what "More SFI orgs for ed" means. SFI is the TLA (three letter acronym) for the Santa Fe Institute, and "ed" stands for "education." I had expected teaching to be more along the lines of SFI than today’s structured curriculum. I strongly suggest you look SFI up on Google.

’Tis nearly 2010 and I am writing a book celebrating innovation where the reader and I will travel into the past and the future. I like predictions because I will be long gone before you find out how wrong I was. One of my major projections is that factories will become peripheral to the computer. Factories will be USB devices; machines, USB devices. And the entire enterprise will be managed and controlled by what we now call a computer. The technology will be behaviour agents, quantum calculations and computations of cause and effect. Nanotech will progress downward into femtotech. Entanglement, a disturbing physics development, will have a significant impact on communications. The World Wide Web will be everywhen. Wireless communications will eliminate the printed circuit board: each semiconductor element will have high-speed, 10-centimetre-range communications so a basket of semiconductors can have a changing connection topology, and the operating system will instantaneously "rewire" the topology.

Since the beginning of our species, we have been production limited. We did not have enough shelter, health care, food, children or free time. Now we have enough production but not enough customers. We have left the production-limited society and entered the consumption-limited society. (There are some areas, however, that are still production limited, such as health and space.) The market for automobiles, for example, is consumption limited. There are more registered cars than licence holders, and now autos last twice as long. That is a dictionary definition of market saturation. If a midrange automobile priced at $38,000 is not selling, the manufacturer lowers the price. Car companies think the issue is price when it is really marketplace saturation.

Social issues are more important than the bubbles of Y2K, swine flu and hurricanes, so as the population grows, we can expect warfare, class struggles and revolutions. Simulation and modeling technology can partially solve these social issues. Modeling and simulation will also be used in engineering, management, communications and energy. These techniques will continue to feed Moore’s Law.

As you can see, my biggest concerns (and not necessarily predictions) are social issues, warfare, population growth, the workforce, the environment (actual and perceived) and education (training versus understanding).

This column may give you a headache and will require some surfing on Google. Remember, in the past, most predictions were too conservative.

Dick Morley is the inventor of the PLC, an author, speaker, automation industry maverick and a self-proclaimed ubergeek. His latest book, Techshock Caution: Future Under Repair, is now available (see Page 4). E-mail him at morley@barn.org.

Related
The tip-over phenomenon: Why can’t Johnny read?
Do new advances in technology mean IT managers will soon be fired?
Automation, innovation and soup: Morley takes on Houston for ISA Automation Week
The scoop on poop and how to save the environment
Tags