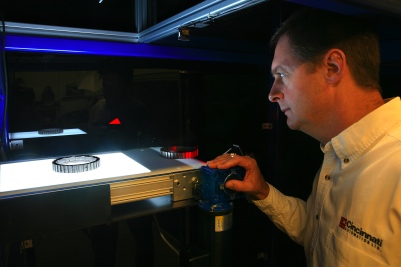 "For gaging operations, backlighting is positively preferred," he notes. "You get a silhouette of the part with crisp edges, sharp contrast and no shadows for precise dimensional inspection against the programmed master."

In the past, the Erlanger, Ky., company would have processed the parts on a stationary backlight table, he says. "To gauge overall geometry and edge geometry, which we’re doing here, we’d use a pick-and-place system for part transfer and a walking beam to advance parts to the first station for top inspection and on to the second station for side inspection," Smith explains. "We’d have to move parts to the inspection station, then move them off, so doing backlighting on the conveyor itself is a great advantage in speed and simplicity."

Pick-and-place backlit gaging was limited to about 10 parts per minute, compared to 36 a minute for the new continuous conveyor system. And, that higher processing speed is governed by the speed of the part loading system, he notes. He believes a backlit system could easily handle parts at 60 to 120 a minute, depending on part size/configuration and faster loading capabilities.

"A high-speed vision system can process a part in less than 100 milliseconds, so theoretically a system could process up to 600 parts a minute, provided you get the parts on the belt that fast," Smith adds.

The continuous gaging system is configured to run 40 different part numbers for the automotive supplier, ranging from five up to eight inches OD.   Robot grippers load the parts three at a time on the 66-by-12-inch translucent belt. Parts advance along the belt to the LED light field, where each is visually gauged by an overhead Keyence digital camera with an 8.5-inch field of view. At the end of the conveyor, a second Keyence camera with a 0.5" field of view gages the side geometry, catching the lead edge just as it extends beyond the conveyor. Parts then pass off the conveyor to an incline slide with a diverter flap. Failed parts drop through a slot in the incline. The flap lowers for good parts, covering the slot and allowing parts to pass down to the next station.

Delivering two mega-pixel imaging, the Keyence cameras in the CA system provide 0.006-inch pixel resolution for overall part gaging and 0.0003-inch pixel resolution for edge gauging, based on the respective fields of view. The machine control shows images of each part being gaged, with both views tiled on the screen at the same time along with read-out results. Gauging data can be recorded as a text file to the system’s PC for SPC quality control.

Integrating backlighting with the conveyor enabled a highly compact design, with the entire machine measuring just 96 inches long by 36 iches wide by 70 iches tall. "This is a very space-efficient, Lean solution for plants," Smith stresses. The conveyor is mounted 55" off the floor, giving plenty of space for stacking parts for conveyor loading and for a scrap bin inside the machine to catch rejects. The bed of the Conveyor Technologies conveyor is only 2.28 iches deep, even with the LED light module mounted inside, for space savings and application versatility. 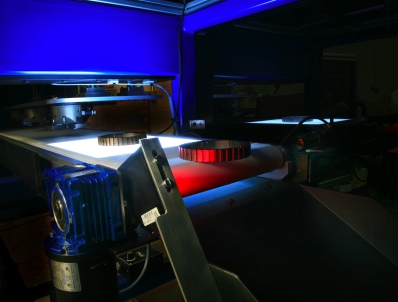 "Backlit conveyors are still relatively new, but we were fortunate in finding a source almost in our backyard," Smith says.

Cincinnati Automation specified a 10-by-12-inch light field. AccuVision light fields are available in six widths (two to 12 inches) and five lengths (six to 30 inches). The backlit conveyors can be ordered in belt widths from 2.5 to 24 inches.

Made of translucent urethane, the conveyor belt "has really good diffusion properties, a good even light for the camera," Smith says. "The light is bright enough that it washes out imperfections from dirt build-up or smudges on the belt." Cincinnati Automation selected white LED light for the conveyor so that dirt on the belt would be more obvious, to aid in routine cleaning, he explains. Conveyor Technologies also offers red LEDs, which would work just as well for the Keyence cameras, he notes, but have less contrast for the human eye in monitoring against dirt build-up.

The conveyor’s array of  LEDs provides a more even light than fluorescents, notes Smith. "With fluorescents you typically wind up with hot spots where the bulbs are. To minimize that effect, we would locate the bulbs further away and install diffuse panels, maybe even a couple of panels. It’s more difficult to get uniformity across the light panel.  The way Conveyor Technologies does it, they have rows of high-intensity LED light distributed evenly under the belt and the belt itself is the diffuse panel."

Freedom from frequency oscillation makes LEDs ideal for high-speed digital cameras. Fluorescent "flicker" — oscillating cycles of bright/dim — usually aren’t visible to the naked eye, but will be captured by the camera and are readily apparent on the control’s monitor screen. "The LEDs may cost more than fluorescents at the component level, but are more effective, operate far longer, and are just easier to work with when you consider everything involved," Smith says.

The gauging machine is fitted with dark tinted panels on sides and top to control against ambient light.

Located almost dead-center along the I-75 corridor (and only about a quarter-mile off the inter-state), Cincinnati Automation gets a good 50 percent of its work from the automotive industry, typically Tier 2 and 3.   After automotive, its key customer industries come from medical device manufacturing, also strong regionally, followed by packaging and label inspection.