Low-profile conveyors are ubiquitous in industry, serving key roles in the production and assembly of everything from cosmetics and snacks/beverages to electronics and land transportation. Broadly speaking, these are compact belt conveyors with 2.5- to five-cm (one- to two-inch) pulley diameters and maximum belt widths of 61 cm (24 in.). Typically used in packaging, assembly, labelling, inspection and sorting applications, low-profile conveyors form critical production links where unplanned downtime or time-consuming maintenance are intolerable.

Certainly the most critical areas of low-profile conveyors that draw maintenance attention are the belt and the pulley/bearing system. Speed, load, accumulation and inclined operation increase forces on these components, as well as the drive system, highlighting problem areas such as belt tension. Belt manufacturers universally cite correct belt tension and crowned pulleys as keys to long belt life and consistent slip-free performance with positive self-tracking. Incorrect belt tension is responsible for a high percentage of component-related failures and maintenance costs. Whether over- or under-tensioned, incorrect belt tension can cause a variety of problems, including bearing overload, miss-tracking, belt slippage and accelerated component deterioration.

What do belting manufacturers recommend?
Correct tension varies, but typically it will be one mm of belt stretch per foot of conveyor length. However, with allowable manufacturing tolerances on belts, a belt will normally be a little longer or shorter than its stated size. To ensure correct tensioning, a simple system has been developed to allow maintenance people and even novice operators to set correct tension in seconds. The system uses the tail pulley to set tension. Once all belt slack is taken up, tension is set via a scale on each side of the conveyor, where each increment represents the tension setting per foot of conveyor length. It seems counterintuitive, but a belt that is under-tensioned can actually elongate in use, which leads to many belts in good condition being discarded, due to a conveyor’s limited tensioning capacity.

Again, following the recommendations of major belt manufacturers, a crowned pulley with a correctly tensioned belt is the preferred way to achieve automatic belt centring. A crowned pulley produces dual lateral opposing belt forces, which balance each other when the belt is centred over the crown. If the belt moves off centre, these lateral opposing forces become unbalanced, resulting in the “higher force” side directing the belt back to its centred position. This action provides virtually wear-free centring. Crowned pulley systems also allow higher accelerations and speeds with much less belt and component wear.

Properly tensioned belts on crowned pulleys easily withstand moderate short-term lateral forces without major displacement from centre. When side loads increase, a V-retainer on the underside of the belt can be added to limit off-centre drift. The V-shaped profile rides in a groove cut into the pulleys (which reduces pulley rigidity), and a groove running the length of the conveyor bed. This approach allows the crowned pulley to quickly centre the belt when the external force is removed, minimizing wear on the V-retainer. Belting manufactures recommend that V-retainers should not be the primary belt tracking system due to the high wear the V-profile incurs. If the lateral force is sufficient, the V-retainer will climb out of its groove and may damage the belt. An alternative is to use the V-retainer on the top edge surface of the belt and have it guided and constrained from the top down by a rolling Delrin V-guide, located opposite the point where the belt experiences side forces. These guides keep the V-profile fully constrained with reduced wear. A normal V-retainer alone offers no true “non-contact guiding,” so it tends to drag against the sides of the groove and constantly wear. Another point to consider on a bottom-mounted V-retainer is that the weld used to attach it results in a slight high spot in the middle of the belt, which can be troublesome if the belt carries small products that are prone to tip over. Because of material incompatibilities, the V-profile cannot be used with certain types of belts, such as silicon-based, Teflon and polypropylene.

Pulley diameter – size matters
Low-profile conveyor pulleys normally range from a 2.5- to five-cm (one- to two-inch) diameter, but this small range can produce a surprising difference in conveyor capacity and performance, as well as belt, cleat and bearing life. Smaller diameter pulleys may be needed for applications requiring a minimum height profile where speeds and loads are moderate. However, logic dictates that a smaller-diameter drive pulley will have a much greater tendency to deflect as the conveyor width increases (e.g., a 3.2-cm pulley without a V-groove will deflect nearly five times more than a 4.7-cm pulley with the same load). This creates an inherent “traction” disadvantage for load-carrying purposes and can negate the crowning effect (belt-centring capability) of the pulley. This is highly problematic in applications that involve reversing, wider conveyors, accumulating or inclined operation. Flexing a belt over a smaller diameter also accelerates the breakdown of the belt structure, leading to erratic operation and shorter life.

When scaled up in width, conveyors with small-diameter pulleys often cannot carry proportionally greater loads. For example, a conveyor with a pulley diameter of approximately five cm (two inches) with a correctly tensioned belt will carry twice the load at a 61-cm (24-inch) width that it does at a 30-cm (12-inch) width. This rule of thumb does not hold as pulley diameters approach the 3.2-cm (1.25-inch) range. 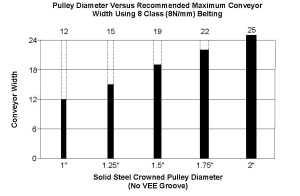 Smaller pulley diameters – with their greater tendency to deflect – have limited ability to produce the proper belt tension needed to achieve automatic centring with a crowned pulley. The resulting loss of “traction” and self-centring are sometimes compensated for by lagging or knurling the pulley and substituting a longitudinal V-retainer rather than a crowned pulley for belt centring. Because the pulley must now have a V-groove in its centre, as well as being knurled, its rigidity is further compromised. Belt manufacturers, too, discourage knurled pulleys because they invariably abrade the belt underside and resist tracking, which leads to a substantial reduction in belt life. Impacted debris in the pulley knurl, or worn knurling, can lead to belt slippage and miss-tracking, as well as accelerated belt, V-retainer and pulley knurl wear. Abrasion can occur without any load on the conveyor, and increases with belt speed. Debris from this abrasion may be unacceptable in food, pharmaceutical or clean room applications. Routine cleaning of the knurling is impractical because it requires stopping production and removing the belt.

Drives are available in a wide variety of styles. One style that is gaining popularity is the external shaft-mounted design. This unit is compact, provides “perfect alignment” and eliminates all couplings, drive belts, chain, sprockets, guards and tensioning. These drives can be radially positioned in 30-degree increments. Mounting of this drive allows an exchange in less than five minutes when equipped with an optional plug connector.

If a conveyor is used for multiple applications that can be run at lower speeds, a variable-speed drive may be desirable. This reduces wear and power consumption, and provides optimum speed for each application.

The service manual for a conveyor can give clues to potential future issues. Sections on preventive maintenance and troubleshooting can be enlightening. For example, does the manual recommend stocking spare pulleys, bearings and bearing plates, or disassembling and checking bearings during a belt change or cleaning knurled pulleys? Belt change time should be based on the conveyor in its operating position, not resting on a bench. Manufacturers offer a broad range of options such as cantilever stands, tool-less guide rail removal, belt support removal and belt release that can permit a tool-less “one-minute” belt change on a stand-mounted conveyor. These options should be reviewed with the manufacturer, especially if downtime is a critical factor.

Charles Mitchell is the president of Conveyor Technologies Ltd.