Features Opinion
Automation software: A review 25 years in the making 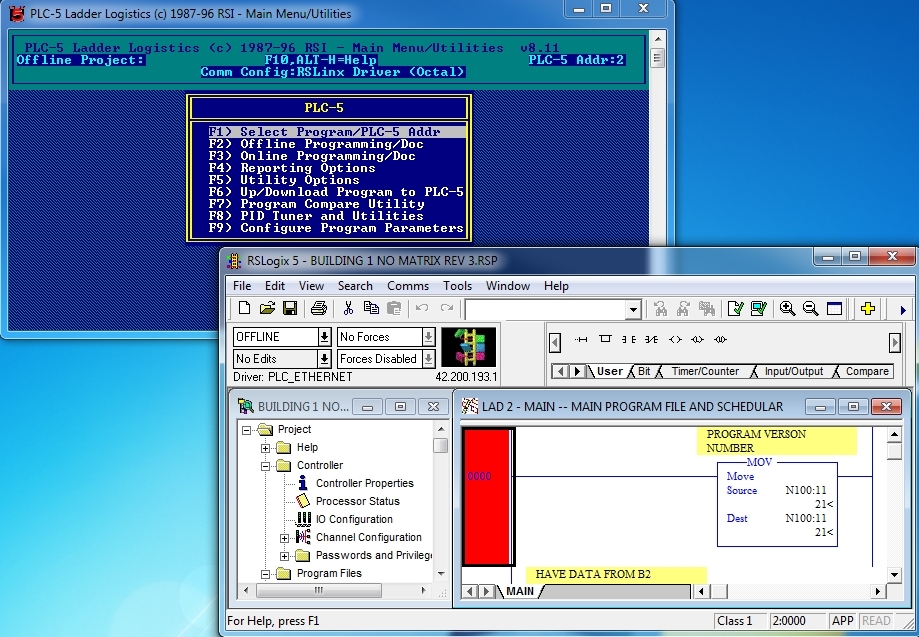 A comparison of the function key interface of yesteryear to the present-day Windows interface.

In 1986, automation software was in its infancy. I know because I was there.

One of my early clients, Ted Petrus, bought one of the first Xycom documentation systems for Allen-Bradley PLC systems at a cost of more than $25,000 for E.B. Eddy Forest Products in Espanola, Ont. There was no hard drive, as I recall, and it had two- to eight-inch CPM-based drives. A 132-column dot matrix printer was the output device, and it took more than four hours to produce a copy of a PLC 2/30 program.

Graphic systems were firmware-based, such as Westhead Systems, Allen-Bradley’s Advisor and ModVUE. All components were provided by the vendor, which led to a very high cost of ownership. These products made way for DOS-based personal computer solutions, such as Intellution’s FIX/DMACS and Advisor PC. They were still expensive, but they gave the user many additional features and capabilities.

The PLC programming arena was just getting started due to the popularity of the personal computer. There was a proliferation of companies producing software for the various PLC hardware vendors. Taylor Industrial Software, DMC, Tele-Denken Resources, Graysoft and ProDoc, among others, all had offerings for the current crop of hardware.

Being an Allen-Bradley PLC specialist, I went to the first “school” for Allen-Bradley’s own IPDS software. It was developed to support their PLC-5 processors. At the school, we were in a room full of IBM PCs with two megabytes of RAM running Quarterdeck’s expanded memory drivers to run the software. These PCs had 20-megabyte hard drives. Slow? Yes. Expensive? Absolutely. Even the software was about $8,000 per licence.

These programming systems were DOS-based with function keys as their interface. I believe the year was 1983/1984. In 1985, another software company emerged to develop “good” software, which Allen-Bradley had arguably failed to do. That company was ICOM.

There was no mouse, only keyboard action, which was frustrating to most since even the QWERTY keyboard was new back then.

Video drivers were not advanced at all. Most systems were running EGA (Enhanced Graphics Adapter), which had an astounding palette of 64 colours, with a resolution of 640 by 350. IPDS was gray scale. ICOM brought colour to the programming world in 1985/1986. VGA (video graphics array) didn’t appear until 1987.

Windows 2.0 was the only game in town for PC-based mouse-driven software – but that was in 1987, too.

The beginning of software was painful in the automation world. Not many people understood it, and fewer knew how to use it. Remember that the personal computer was only five years old, and technology advancements were slow. Geeks had to learn new languages, use compilers and learn how to write device drivers for hardware that was less than normal.

A device driver is a piece of software that is developed to interface with a piece of hardware. Most vendors had a specialized card to communicate on their own networks. Developers had to keep up with all kinds of stuff, and old drivers often didn’t work with the new hardware. Back then, everyone’s driver was different, so you had to have a square peg in a square hole!

And it took weeks to develop and test a driver.

There really wasn’t a lot of database action because of the use of Novell Netware as the main network platform, and most bigger companies used Digital Equipment’s VAX computers for data storage. Not many knew how to integrate a VAX to the plant floor, and that started the fight between the control guys and the IT department.

Laptops were almost non-existent. The Allen-Bradley T50 terminal was a portable programming device that weighed more than 30 pounds. It was nice to have software but, at that weight, it really was not convenient!

If you use SCADA, HMI or programming software on a laptop or over a network, thank the old guys because they developed the needs and functions. It is more functional and less expensive, and allows for many things that couldn’t be done 25 years ago. The Internet didn’t exist, so you got the software on 5.25-inch disks, then 3.5-inch disks. Driver updates took days to arrive, not minutes.

It was a special time in automation software history. I am proud to have lived through it and witnessed the progress. It was very exciting to be a part of. Innovation ran rampant.

Thanks to all of the third-party software companies that turned the industry on its ear. Most are gone now, but thanks is still deserving. The industry wouldn’t be where it is today if it weren’t for them.

This column originally appeared in the September 2011 issue of Manufacturing AUTOMATION.