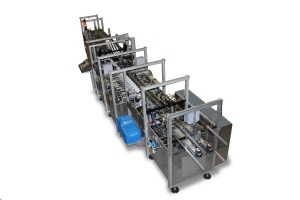 It is difficult to automate the loading of bottles into transparent cartons because of the need to orient the bottles so that the right part of the label is visible. In the past, a major beverage producer had 15 people dedicated to the task of manually orienting the bottles. Recently, this producer has become the first to successfully automate high-speed carton loading with the use of a bucket autoload cartoner from AFA Nordale Packaging Systems in Brampton, Ont., that orients the bottles and places them into cartons at a speed of 450 bottles per minute.

The cartoner orients the bottles by simultaneously spinning 14 bottles while 14 Cognex Checker 3G1 vision sensors view each bottle’s label. The Checker vision sensors send a signal to stop spinning each individual bottle as soon as it sees a letter that indicates the label is in the correct position.

“We tried numerous vision sensors but the Cognex Checker was the only one that was capable of accurately detecting all of the different possible colours of labels,” said David Langen, electrical engineer for AFA Nordale.

The beverage manufacturer has seen rapid increases in demand for its products. The company’s unique packaging is one of the keys to its success. A colourful plastic sleeve encloses the bottle. The company makes several different types of drinks and each drink has its own unique package design and colour scheme. Two bottles are packaged inside a transparent carton that highlights the unique design of each bottle. It’s critical that the bottles be oriented so that the central point of the label is visible through the transparent window of the carton.

“With the advent of reliable machine vision systems, orienting the bottles before placing them into the cartoner has become a viable option,” Langen said. “Orienting bottles at a speed of 30 or 60 bottles per minute would not be a major challenge. But in this application, the beverage manufacturer needs to pack 450 bottles per minute.”

AFA Nordale is a producer of cartoner machines, whose MK-SBA compact sliding bucket autoload cartoner is used by many producers of bottled beverages. The high-speed bottle infeed with quick change timing screw coupling allows for quick and accurate bottle size changeover. Digital scales allow the operator to keep track of different product configurations to further expedite changeover. So it was natural that the beverage manufacturer would ask AFA Nordale to propose a solution to automate the cartoning operation at required levels of speed.

Sergiu Dinescu, electrical engineer, was given the lead responsibility to develop the machine.

“When we were first approached by the manufacturer, it was clear that the mechanical aspects of the machine were well within requirements that we have met on many previous jobs,” Dinescu said. “The big challenge was clearly going to be our ability to orient the bottles at the high speeds required by this application. We built a test rig and evaluated demonstration sensors from all of the leading vision companies. We tried each of the sensors with all of the different label types. Each sensor seemed to have problems with one or more label types.”

“For example, one sensor worked with the red labels, but not with the black or blue labels,” Dinescu said. “Another sensor worked with the red and blue labels, but not the black labels. We also tried reading the barcodes, which were on the backside of the label. The barcode readers that we tried were able to accurately locate the label. But after we read the label, it was necessary to spin the bottle around just the right amount so that the front of the label would be visible in the window, and we found that this was difficult to accomplish.

“Then we tried the Cognex Checker 3G1 and found that it was able to read all of the different labels without any difficulty,” Dinescu said. “Setting up the vision sensor was very easy. We simply trained the sensor on the label and clicked on the feature that we wanted to detect. We tried several different features on the bottle and settled on the large piece of text on the front of the bottle label. From that point on, the vision sensor sent a signal whenever it saw the label. The Checker is able to detect all label colours without any difficulty. We were amazed at the speed with which the sensor was able to detect the labels. Our tests on the rig showed that it can easily exceed our customer’s requirements by detecting labels at a speed of 1,000 bottles per minute.”

The Checker 3G1 integrates lighting, optics, camera, processor and I/O in an industrial IP67 housing package that fits the tight confines of automation equipment. The Checker 3G1 can be configured as a presence sensor or measurement sensor. Presence sensors verify that features are present. Measurement sensors verify that features are the correct height, width and/or diameter. Checker is also able to detect and track over 6,000 ppm in varying positions along the production line, overcoming imprecise part positioning and delivering consistent, precisely timed pass/fail results. The Cognex offering does not require a PC for setup. Instead, the SensorView Teach Pendant, with its unique One-Click Setup technology, allows the user to set up jobs right on the line and have them running in a matter of minutes. A single teach pendant can be used to set up any number of Checker 3G sensors and can remain connected for real-time application monitoring.

How the cartoner machine works

With the critical vision problem resolved, AFA Nordale engineers designed a complete cartoner system that meets the beverage manufacturer’s requirements. After being fitted with sleeves, the bottles are laid into individual buckets that are carried by a conveyor through the machine. A device called an orienter travels beside the bottle conveyor at the same speed and simultaneously turns 14 bottles in the proper orientation. Then the orienter moves backwards into position to orient the next 14 bottles. The motion of the orienter as it moves along the line and then back to handle the next batch of bottles is similar to the head of a typewriter.

The orienter contains one friction belt that spins all of the bottles and 14 cylinders, one for each bottle. Each cylinder is associated with a Cognex Checker 3G1 vision sensor that captures an image of the bottle as it is being spun. As soon as the bottle is in the proper orientation, the sensor sends a signal to the machine control system. Then a cylinder in the orienter lifts the bottle off the belt so that it stops spinning. During machine validation, the orienter demonstrated the ability to position the labels within +/- 15 percent of dead centre, well within the +/- 30 percent requirement of the bottle manufacturer. The success rate in orienting the conveyors is 99.99 percent. The only bottles that fail to orient properly to date have been those with the sleeves formed improperly so that the bottles get stuck and fail to rotate in the buckets.

“Up to now, drink manufacturers have avoided using cartons with windows because there has been no satisfactory solution to the problem of orienting bottles at high speed,” Langen concluded. “This new machine is the first to solve this problem by combining the latest vision sensor technology with an innovative mechanical solution. The machine meets the beverage manufacturer’s requirement of 450 bottles per minute and has been tested to 600 bottles per minute. In both cases, the Cognex Checker 3G1 vision sensors have been able to align every single bottle except for those with misformed sleeves.

“It was much easier to set up the orienter than we expected,” Langen added. “We got it up and running very quickly and it has proven very stable in operation. The beverage manufacturer told us that we were the only supplier that offered a solution for automatic cartoning that did not require modifying the existing bottle or carton.”