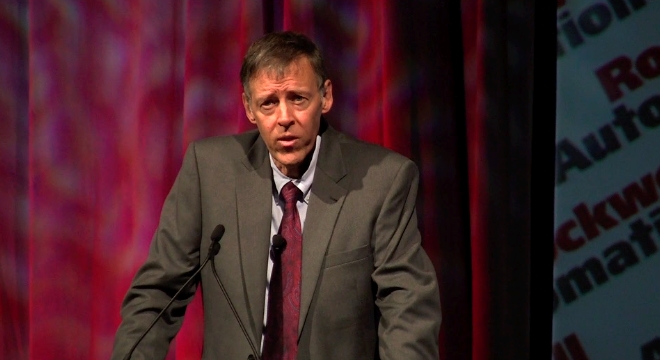 Rockwell Automation celebrated its 20th Automation Fair in Chicago last week, with 14,194 customers, partners, media and employees in attendance. Attendees gathered at McCormick Place November 16-17 to learn about the latest automated manufacturing technologies and trends, and to learn how to use their automation investments to achieve their business goals.

The two-day, no-cost event, held annually in different cities throughout the United States, features customer training sessions, seminars and an exhibit floor populated with the latest products and solutions from Rockwell Automation and more than 100 exhibitors, including product partners, solution providers, machine builders and strategic alliance partners in the Rockwell Automation PartnerNetwork program.

Manufacturing AUTOMATION joined more than 150 media and analysts from around the world at Manufacturing Perspectives in Chicago the day before the launch of Automation Fair 2011. This exclusive event gave media and industry analysts the opportunity to hear about compelling topics facing global manufacturers and users of automation.

Robert Atkinson, founder and president of The Information Technology and Innovation Foundation, a Washington, D.C.-based technology think tank, kicked off the event with a keynote address about how innovation drives growth and competitiveness in manufacturing.

He said that manufacturers have to drive productivity and automation.

Atkinson said IT is a big driver of innovation.

“I think we’re in this phase of what we would call digital transformation, where essentially everything that can be digitized will be digitized – whether it’s checking into an airport, whether it’s ordering a meal at a restaurant. Whatever it is, if it’s an information function, ultimately it will be digitized,” he explained. “And much of what manufacturing is is an information function. So I would argue that we will be shifting to what a lot of people call digital manufacturing.”

According to Atkinson, this shift is happening because IT performance is going up and price is going down. There is an opportunity here because the prices are dropping so dramatically, and network capacity has expanded 18 million percent in the last decade, he said.

Atkinson also said that manufacturing isn’t applying and using advanced IT as much as certain other sectors in the U.S. economy are, but there are opportunities in doing so.

“Much of manufacturing, even though it’s about transforming physical things into some other form, much of that is engaged in information processing – a part is information, where it is, what its status is, what its quality is. These are essentially all information,” he said. “One of the key things that IT can do is it makes developing that information, processing and storing and analysing it all much, much easier and all able to be done in real time…The other thing that’s happening is this shift to the cloud. Right now, 44 percent of U.S. manufacturers are implementing or evaluating some kind of cloud-based services…One of the key advantages of the cloud in this area is that you can, number one, not have to worry about that as your core competency, and number two, be able to have data in a more accessible form in a much more integrated way than when it’s just on individual servers. The other thing that’s happening is we’re slowly moving towards what’s called IPV6 – Internet protocol version six. We are now mostly in Internet protocol version 4, but Internet protocol version 6 essentially lets you have an individual IP address that’s largely infinite. You can have an IP address for every grain of sand on the planet and still not run out. So what that really means is that you can have an IP address for every product, every part in your factory, and then track it, see where it’s going, see what’s happening with it.”

Keith Nosbusch, chairman and CEO of Rockwell Automation, also spoke at the conference, and discussed the importance of taking advantage of all of the advancements in both information and communications technology on the plant floor.

“We believe that there are three primary drivers for the transformation of an IT-connected enterprise to an optimized plant and supply network,” he explained. “The first one being driving productivity across the plant floor and out into the enterprise system. The second one is all about agility, flexibility and synchronization, where the integration of the plant operations occurs with the supply chain and across the external supply chain…And then finally many companies are looking for how they can achieve their sustainability goals and create a much cleaner, more energy efficient manufacturing environment. The energy footprint is very important to the majority of our customers today. They’re actively looking for ways of driving this sustainability throughout their entire organization, including the plant floor. Rockwell Automation is certainly helping customers implement these capabilities, these needs. And one of the driving forces behind the ability to have an optimized plant and supply network is what’s evolved with the utilization of Ethernet throughout the manufacturing environment. And, certainly, we believe that the utilization of standard, unmodified open Ethernet technologies is critical to the future of an optimized plant and supply network, and the ability to drive continued advancements in productivity. We’ve worked very carefully with our partner Cisco in this area. It’s an opportunity for a leader in IT and a leader in manufacturing on the plant floor to put together the benefits that each of us bring from our backgrounds, in our leadership in these various areas, and to be able to combine those under and around utilization of standard unmodified Ethernet to be able to take advantage of the future of unified communications. Unified communications is the ability to integrate voice, video, data and mobility in the future as they become relevant to the plant floor and across the supply chain. It’s about driving productivity of not just the automation, but the productivity that information will bring manufacturers in the future. And that’s one of the more exciting areas that we are operating in today.”

For a recap of Mary Del Ciancio’s live tweets from the event, click here.

Automation Fair will return to Philadelphia, Pa., in 2012, from November 6-7.