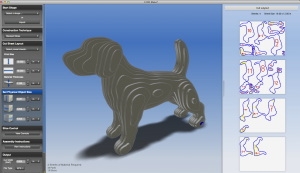 Autodesk 123D Catch and Autodesk 123D Make Technology Preview enable anyone to quickly and easily capture 3D models from the world around them, and turn those 3D models into their own artistic creations. The Autodesk 123D Catch application – previously codenamed Project Photofly on Autodesk Labs – is a public beta release that uses the power of cloud computing to quickly transform digital photos into photorealistic 3D models. Anyone capable of using a point-and-shoot, mobile phone or advanced digital SLR cameras to snap a series of photos of objects, people or scenes can use 123D Catch to generate 3D models. The app also has built-in sharing capabilities with short movies or animations for viewing on mobile devices, YouTube and other social media channels. The Autodesk 123D Make application is a technology preview for the Mac, capable of converting digital 3D models into 2D cut patterns that can be assembled in low-cost materials, such as cardboard, wood, fabric, metal or plastic. The cut pieces come together to create a physical representation of the original digital model. 123D Make enables users to create art, furniture, sculptures or other quick prototypes to test how a design will look in real life. Autodesk developed this technology to act as a digital engineer capable of helping individuals create 3D models and, eventually, transform the models into the real thing.