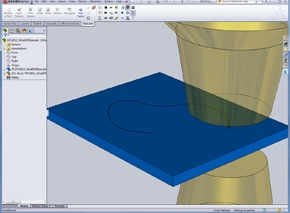 Delcam’s 2012 version of Delcam for SolidWorks, its integrated CAM system for SolidWorks, includes programming of wire EDM for the first time, alongside the options for the programming of turning, mill-turn, drilling and two- through five-axis milling. Other enhancements include target-part comparison (the ability to compare a model of the desired final shape with the shape achieved by the programmed toolpaths), and multiple-instance programming (the programming of multiple SolidWorks components in one operation, either in the same orientation or in different orientations). Fully automated de-burring and chamfering has also been added to give faster programming of these finishing operations on two- or 2.5-axis parts. Delcam for SolidWorks 2012 also incorporates enhancements from the 2012 release of FeatureCAM, including improvements in the use of stock models and new options in the tooling database.