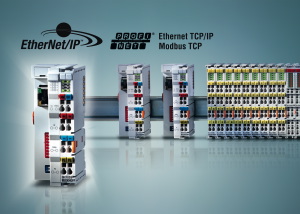 Beckhoff Automation’s BK9055 Compact Bus Coupler connects EtherNet/IP with modular, extendable electronic terminal blocks. One unit consists of one bus coupler, one to 64 terminals (255 with K-bus extension) and one end terminal. When used alone, the bus coupler is suitable for star wiring topologies. However, the BK9055 is software-compatible to the BK9105 EtherNet/IP Bus Coupler from Beckhoff, which, unlike the “Compact” version, has a second RJ 45 port (two-channel switch); therefore, the I/O stations can also be configured with a line topology instead of the classic star topology.