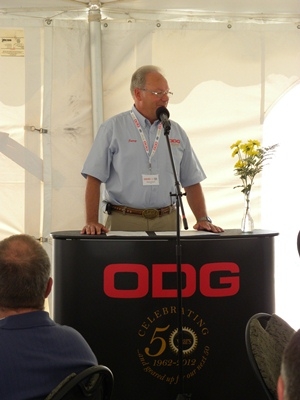 The Friday celebrations opened up the company’s two plants to customers, suppliers and dignitaries, including Member of Parliament Harold Albrecht. Attendees were able to tour both facilities, including the Gear Division plant as well as the Vehicle Division plant that manufactures ARGO amphibious off-road vehicles. The company then held similar celebrations on Saturday for the community.

ODG first opened in the Waterloo region in 1962, and today, it manufacturers gears and transmissions, amphibious extreme terrain vehicles and rovers for future lunar exploration. The company occupies a 121,900 square feet facility with 230 employees, and boasts sales of $60 million.

ODG recently invested more than $3 million towards new production technology including gear grinding, dry hobbing, helical shaping as well as milling and turning. In 2012, the Gear Division will continue to grow through enhancement of lean manufacturing concepts, technological differentiation and value innovation.

The all-season ARGO was launched in 1967 and has since become the one of the world’s most popular extreme terrain vehicles. The all-terrain ARGO seats up to six passengers and excels when other vehicles can’t get the job done. The all-wheel drive ARGO is the machine of choice for big game and waterfowl hunters, outfitters, rural property owners and adventure tour operators.

ODG chairman Joerg Stieber addressed the crowd on Friday, giving a bit of background into the history of the company. Stieber’s father, who owned a German gear manufacturer, decided to open a facility in the Kitchener area in the early 1960s. He launched the company with only a few employees, and 50 years later, it has grown into one of the largest manufacturers in the area.