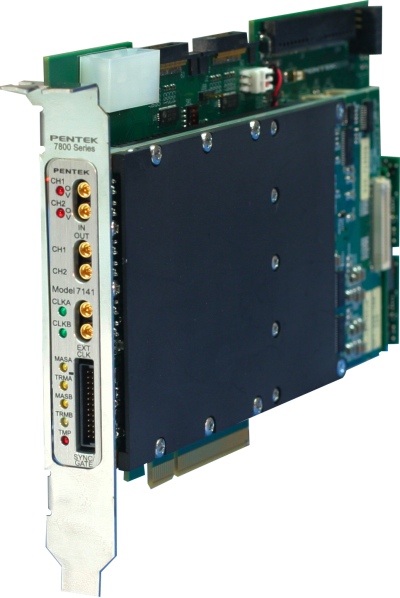 Pentek Inc. has released the 7800 series of high-performance I/O boards built upon a half-length x8 PCI Express (PCIe) 2.0 carrier board. The carrier board hosts a PMC/XMC module to fulfill a range of software radio, data acquisition and beamforming applications. Now designers can utilize PCI Express, FPGAs and high-speed interfaces in low-cost PCs as well as in blade servers.

Design Features
• In addition to the x8 PCIe interface, the 7800 carrier board features a number of high-speed gigabit serial connectors for inter-board communication. Using protocols such as Xilinx Aurora and Serial Rapid I/O, these interconnections support communication between multiple 7800 Series boards completely independent of the backplane. This provides a critical advantage for high-connectivity systems such as radar and beamforming applications, where significant data must  be transferred across multiple boards.

• A built-in fan provides forced-air cooling that can be invaluable in dissipating heat developed by high-speed A/Ds, D/As and FPGAs, without requiring an extra slot.