Motion Industries’ two new Canadian facilities might not have an actual bottling line, but that didn’t stop the company from adopting a conveyor solution widely used in the bottling industry, where the system’s low-friction components have proven to reduce operating costs.

Designed by a Montreal-based OEM, the new flat-top conveyors use chain and geardrives from Power Transmission Solutions, a Division of Emerson Industrial Automation. The ultra-low-friction conveyor has delivered a range of advantages, including low noise, compactness and low energy use.

According to Tom Sawyer, Motion’s distribution centre director, the conveyor is much quieter than roller conveyor, vastly improving the work environment, and it has proven very reliable, conveying totes without the drift that can occur on a gravity roller conveyor. He says the new conveyor demonstrates the plastic chain’s advantages beyond a washdown environment.

Motion Industries Canada opened its two new facilities in August 2011, one in Edmonton and another in Montreal, replacing its single location in Montreal and nearly quadrupling its size to 100,000 sq. ft. The inventory shelves branch off at right angles to the shipping conveyor, which runs down the centre of the layout to a 90-degree turn and then to a 180-degree turn leading to five shipping lanes, each for a specific Canadian province. 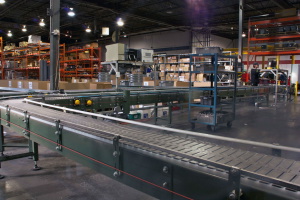 “We pick 2,000 to 2,400 lines per day for our branches, and each line may consist of many pieces of a specific product,” says Sawyer. “Our warehouse management software consolidates orders from the branches so our pickers, using RF scanners, can efficiently pick in the same zone for multiple accounts. The product is regrouped in shipment, and a given branch may have several hundred lines going to it every day. We also pick about 200 orders per day for direct shipment to customers.”

Motion teamed with a Québec OEM to design its conveyors. The team decided that the best product for the application was the flat-top System Plast conveyor, using XPG chain and Nolu S wear strips. This combination has a coefficient of friction of just 0.16, reducing energy consumption about 25 per cent, compared to standard acetal chain and UHMW-PE wear strips. The XPG chain is also rated for 607 pounds, adequate for the 50-pound maximum tote weight handled at Motion’s facilities.

“This type of belt proved ideal for a compact system layout,” Sawyer explained. “For example, we did a 180-degree turn in a six-foot radius, measured on the outside of the conveyor. This is almost impossible with roller conveyor without transfer tables or pushers. Each of our systems includes a section of about 40 feet of accumulation conveyor with a cleverly designed surface that minimizes load and energy use. We use the accumulation section to spot check our totes for picking accuracy.”  Automatic sorting to the shipping lanes is planned for late 2012, using scanners and pushers, with manual sortation being used in the short term. 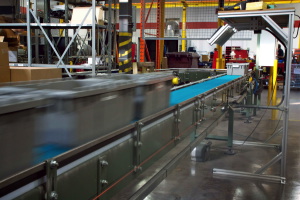 The new conveyor systems use six 575-volt premium efficiency gear motors, with the gearboxes assembled on site at Motion’s facility, which is home to the company’s largest assembly shop in North America. End caps on the motors and bearings protect the rotating shafts. The conveyor requires no compressed air in its accumulation zones, and reduces maintenance with elimination of belt-driven rollers.

“We’ve been surprised by the low noise level of this system, which enhances the workplace, and the conveyor has proven highly reliable,” Sawyer added. “The totes are more secure on the chain than on rollers; much less likely to drift. The chain will actually realign totes slightly, and it easily transports them 175 feet to the first turn. We are quite pleased with the outcome and the results of the installation.”