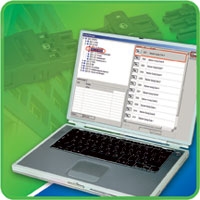 WAGO’s WINSTA designer software is designed to assists electricians and architects with large-scale lighting projects by providing detailed electrical planning with WINSTA components. WINSTA is a modular wiring connection system that merges design, electrical architecture management and usability, reducing field wiring times by up to 70 per cent via pre-wired assemblies. Based on standard elcoCAD software from Hannappel Software GmbH of Germany, WINSTA designer allows planners to use existing CAD and building planning data. WINSTA designer contains a symbol library designed specifically for WINSTA components that simplifies electrical systems planning. Two versions of the free WINSTA designer are available. One is a plug-in for elcoCAD, providing designers with all the functions available in elcoCAD, as well as new functions for WINSTA planning. This version requires AutoCAD LT (Version 2002 or higher) and elcoCAD. The other, a stand-alone version, may be used if elcoCAD is not available; this version only requires AutoCAD LT (Version 2002 or higher).
www.wago.us