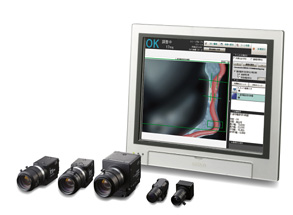 In recent years, the development of electric and hybrid vehicles in the automobile industry has been gathering steam to reduce carbon dioxide and nitrogen oxide emissions in order to implement measures for preventing global warming inspired by the Kyoto Protocol. These vehicles are equipped with many electric devices such as motors, batteries, and transformers. A sealing method using a high sealing quality liquid gasket has been widely used in the automobile industry to secure dustproof and waterproof properties. However, for electric devices, a much higher sealing performance is required to secure airproof properties to lessen the dangers inherent in such devices. This software can be used by installation to the OMRON vision sensor flagship model FZ3 controller.

A leak inspection method is used in engines and transmissions following the injection of oil. This same method cannot be used in the liquid gasket inspection for electric device cases. As a result, sealing is secured by inspecting the glue status immediately after gluing. However, visual inspection alone has resulted in problems such as overlooking of gaps and non-quantification of inspections. Also, use of visual sensors for inspection has resulted in problems such as not been able to inspect glue width stably when the glue path is complex. To solve such problems, this software for glue bead inspection is equipped with OMRON’s original automatic outline scanning function. It calculates the glue status with a high degree of accuracy even for complex glue paths by automatically scanning the glue outline, glue width, gap width and for wrong glue paths. Also, a more stable inspection can be performed by the execution of HDR (high dynamic range), an image processing tolerant to the use environment. By preparing a dedicated glue inspection interface and result display screens, we have made possible, easier inspection setting and error analyses with less man-hours spent.