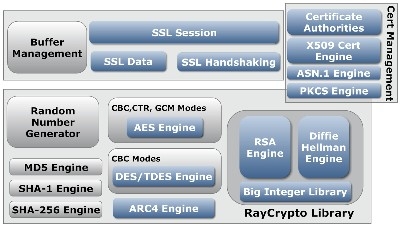 Real Time Logic recently announced it now supports TLS 1.2 with its improved security and encryption in the latest version of SharkSSL, a compact, fast cryptographic engine that delivers high-performance security. With this release, SharkSSL Version 2.5 extends its secure connectivity for resource-constrained, small-footprint processors to low-cost, high-volume ASIC-powered M2M devices commonly used in large-scale networks. In integrating TLS 1.2 into SharkSSL, Real Time Logic implements the stronger cryptographic algorithm, improved encryption, and superior message authentication proven to secure TCP/IP communications at the enterprise level into the small, resource-constrained footprint of an embedded device. SharkSSL implements the new Secure Hash Algorithm-256 (SHA-256), which replaces outdated hash functions and can be used to verify the integrity of copies of the original data without compromising the source.
www.realtimelogic.com