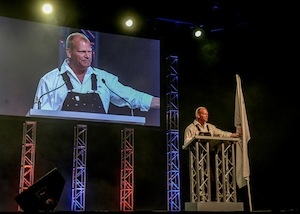 The closing ceremony held on Saturday at the Pacific National Exhibition in Vancouver was highlighted by the announcement of the Competition winners.

The Skills Canada National Competition is the only national, Olympic-style, multi-trade and technology event of its kind for young students and apprentices in the country. The event took place June 6 and 7 at BC Place in Vancouver, British Columbia where more than 40 different assigned projects were showcased in major skilled trade and technology categories.

The competitors were evaluated by independent judges from the respective industry sectors, who based their decisions on industry standards and established work practices, including such criteria as quality of work, safety, cleanliness, skill level and creativity.

More than 200 medals were awarded to the top champions in six skilled trade and technology categories: transportation, construction, manufacturing, information and technology, service and employment. For the complete results, visit the Skills Canada website at www.skillscanada.com.

“The goal of this annual Competition is to reward students for excellence in the skilled trades, while directly involving industry leaders and educators in the training process and in evaluating their performance in a way that is relevant to employers’ needs,” said Shaun Thorson, CEO, Skills/Compétences Canada. “The enthusiasm and hard work shown by the competitors throughout the Competition has been inspiring and we want to congratulate each one. We also want to thank and acknowledge the ongoing support from the Government of Canada, sponsors and organizers for working with us to ensure that there is a bright future for Canada’s skilled trade and technology workforce.”

Mike Holmes, Skills⁄Compétences Canada’s official spokesperson and Mag Ruffman, “Canada’s Toolgirl,” had active roles in the Competition, taking part in several activities alongside the 7500 students from local schools. Visiting students and school groups also had the opportunity to take part in more than 40 “Try-A-Trade and Technology!” activities.