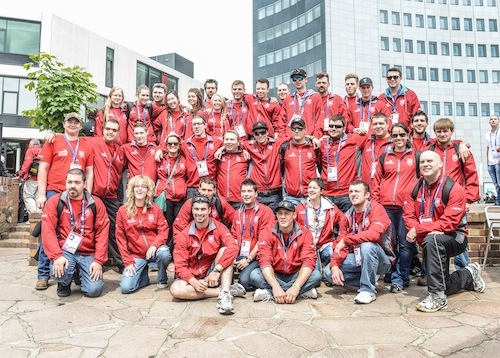 After the completion of four days of international competition, WorldSkills Team Canada 2013 proudly took the podium at the closing ceremony of WorldSkills Leipzig 2013 to receive official recognition for their achievements.

Made up of 27 male and 8 female competitors, ranging in age from 17 to 22, Team Canada took Gold in the Heating and Refrigeration category and was awarded 14 Medallions of Excellence in areas including electrical installations, industrial control and mobile robotics.

“Preparing for WorldSkills Leipzig 2013 has required months of training, hard work and dedication by the 35 young members who make up WorldSkills Team Canada 2013,” said Shaun Thorson, CEO, Skills/Compétences Canada. “We are exceptionally proud of their outstanding performance and look forward to seeing their careers flourish. We are also grateful to our sponsors and partners for their ongoing support which is integral in building Canada’s skilled trade workforce”.

The Honourable Diane Finley, Minister of Human Resources and Skills Development offered congratulations to all of the members of Team Canada.

“You’ve proven to be the best in our country. I am personally very proud that you are representing Canada on the world stage. We need young people like you, who excel in your field, to bring your talent into the workforce. The trades, technologies and service industries are growing. And we need to keep up with that growth. Our government is helping young Canadians like you by offering grants, tax credits and support for training programs, like apprenticeships. We want to encourage even more young people to learn a trade -whether it’s carpentry, cooking or Web design – and bring those skills to the job market. Congratulations once again and I wish you all the very best of luck in the competition and for the future ahead!”

WorldSkills Leipzig 2013 represents Canada’s 12th participation in a WorldSkills Competition, a biannual international event which brings together the world’s most talented skilled trades and technology competitors. This year’s competition brought together more than 1000 competitors from 53 Member countries/regions, making it the largest ever competition of its kind. Team Canada 2013 represented one of the largest delegations Canada has ever sent to WorldSkills, with competitors in 32 of the 46 skills categories.