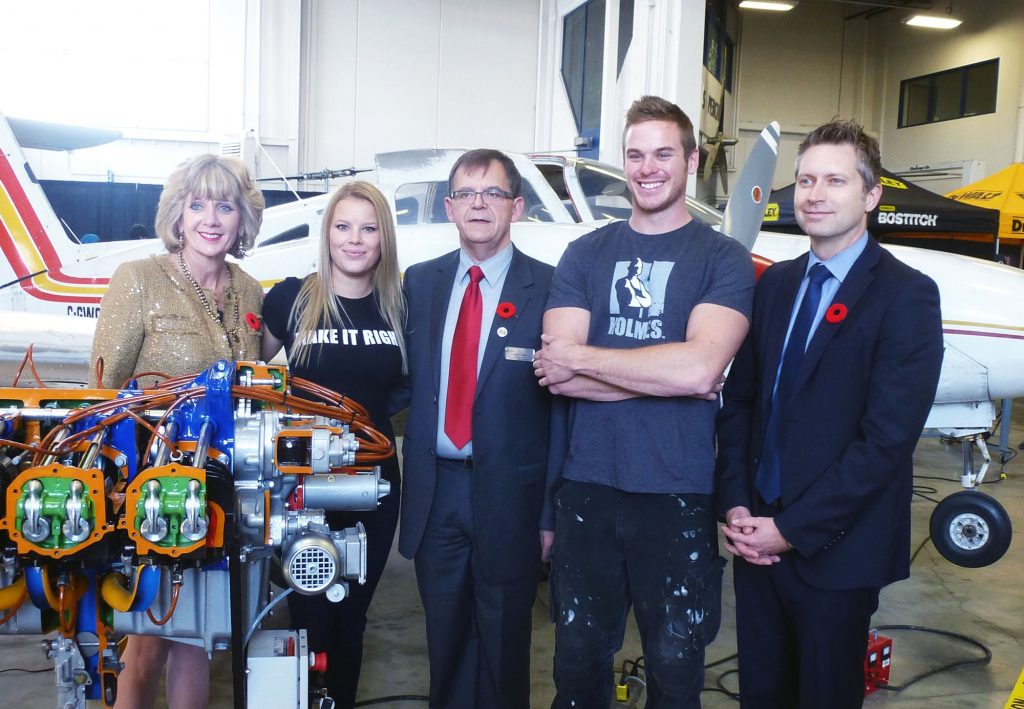 But before they got to “try-a-trade,” the students packed into the college’s auditorium to hear inspirational messages from Skills Canada and Centennial College representatives, as well as Mike Holmes Junior and Sherry Holmes, stars of the hit show “Holmes Makes it Right” on HGTV, and Mag Ruffman, television producer, writer, actress, building contractor and “Canada’s toolgirl.”

“There are millions of Canadians who make a good wage, and that contribute to the kind of Canada we want. We’ve begun to see more and more respect given to those who build, those who create, those who repair, those who invent, those who innovate, those who have taken the term skilled trades and technologists to a whole new level,” Ann Buller, president and CEO of Centennial College, enthusiastically told the students. “The range of opportunities for you is simply incredible. So I hope you have a fantastic day here on campus, but beyond that I wish for you to find something that you love; something that you can turn into an amazing, fulfilling career. And if you choose a career in the professional trades or technology area, do yourself a favour [and] hold your head high, put your shoulders back, and be proud of your choice and the difference you will make in this country.”

Daniel Chudy, who competed in the Skills Canada competition in 2006 in autobody repair and is now a professor at Centennial College, is very proud of the career he chose.

“There is nothing more rewarding than working in the trades. I strongly, firmly believe that. And I think a lot of people are missing out because they never get that chance to try working with their hands. It is the most rewarding thing that you can do, hands down,” he told the students before they ventured off to try different trades.

The theme of this year’s National Skilled Trades and Technology Week is “essential skills,” and speaks to the importance of nine skills identified by Employment and Social Development Canada (ESDC) as critical to a successful career in skilled trades and technology — numeracy, oral communications, working with others, continuous learning, reading text, writing, thinking, document use and digital skills.

“Our industry partners in energy, natural resources, construction, manufacturing and services sectors are reporting that too many young workers are showing up at the job site without the proficiency of skills that is required to complete the work,” said Shaun Thorson, CEO of Skills/Compétences Canada. “It’s a huge economic concern.”

Many students are choosing to opt out of foundational courses, such as math, science and literature, far too early in the education process, he said. When dropping these courses, many young people and their parents may not realize that they are jeopardizing their career choices.

“There’s a misconception among students — and even guidance counsellors — that it’s okay to skip the advanced math and English courses if students are bound for the trades,” said Centennial College’s Ann Buller. “Yet, cars today have more computing power on board than the system that guided Apollo astronauts to the moon. Technicians have to diagnose and resolve issues with sophisticated computer systems quickly and accurately. That only happens when the technician has a thorough understanding of the science at work under the hood.”

Many other activities aimed at engaging young Canadians to consider skilled trades are taking place throughout the country this week. To find out what’s going on in your region, click here.