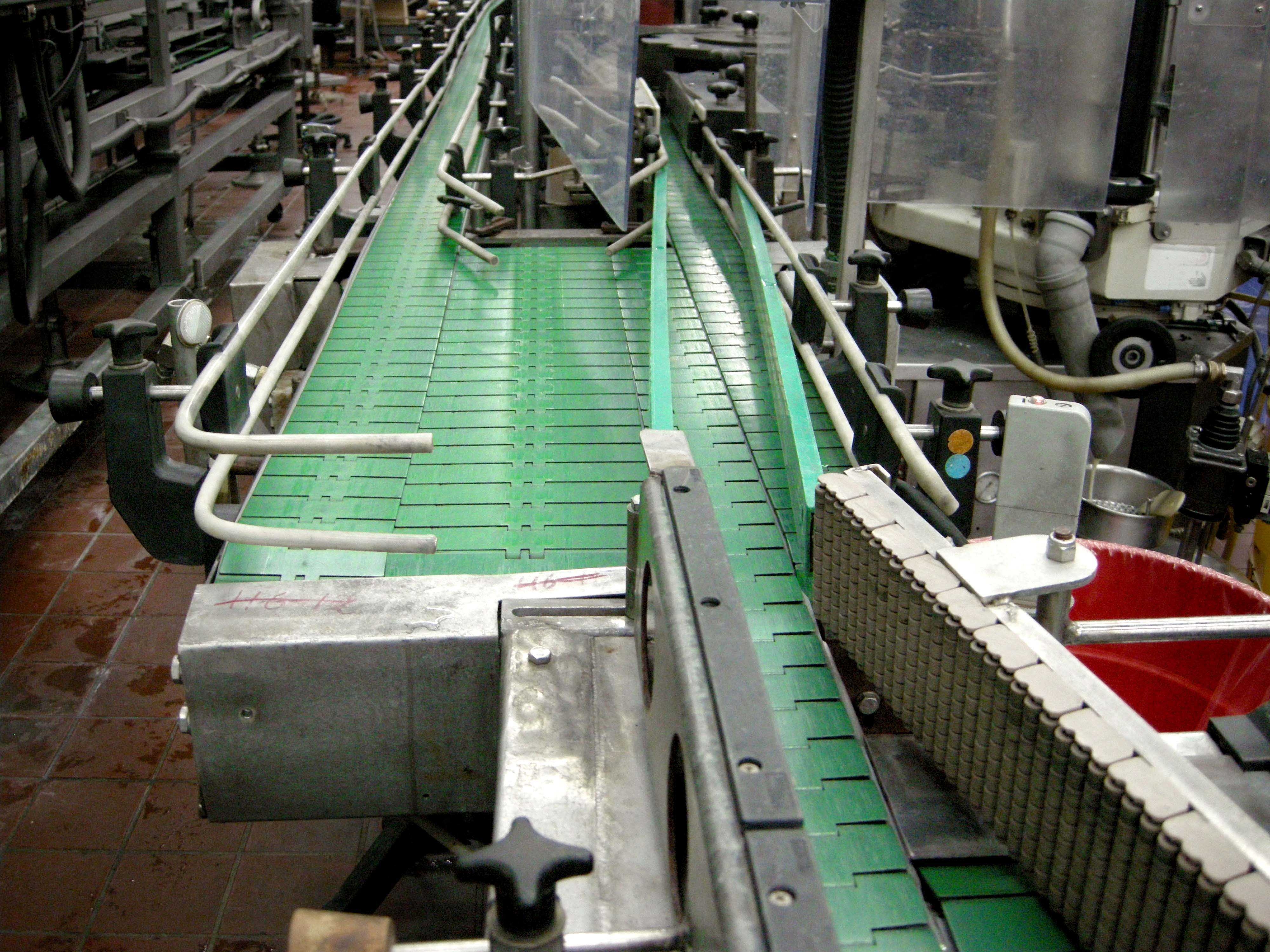 The term “dry wine” has a new meaning at Vincor International’s Quebec bottling operation since soap-and-water lubrication have been eliminated from the conveyor line by installing a new conveyor chain and wear track.

“That’s only the beginning, too, because we have additional savings on soap, water, preventive maintenance, labels and spare parts inventory,” he stressed. “By eliminating the soap buildup that can breed bacteria, we also facilitated our HACCP certification. We are enjoying intangible improvements as well, such as lower noise level in the plant, reduced slip hazard and improved cleanliness. The improvements have been noticeable to everyone involved with this plant, from top management to the people working on the line. We call the new chain the green carpet.”

Vincor Canada is the nation’s largest producer and marketer of wine and related products. The Quebec winery is one of eight worldwide operations spread from New Zealand to the U.K. and California. The company’s premium brands include Inniskillin, Jackson-Triggs, Toasted Head, Sawmill Creek, Amberley, Sumac Ridge, Hawthorne Mountain, Kim Crawford, Kumala Ancient Coast and others.

A variety of issues with the plant’s three-year-old LF acetal conveyor chain — primarily wet labels, mechanical reliability and soap costs — increased costs and drove the decision to retrofit the Quebec line with the System Plast NG chain, according to Larraguilbel. The 200-foot bottling line runs at 70 fpm, producing about 86,000 bottles per shift, with two shifts per day.

“The soap and water used to lubricate the acetal conveyor chain sometimes saturated the bottle labels in the accumulation section, costing hundreds of dollars per year for labels and reprocessing the bottles,” Larraguilbel said. “It also increased costs for preventive maintenance and spare drive components that degraded prematurely from constant exposure to soap and water.”

The purchase of soap and water alone added about $3,400 to the operating cost of the line.

Other significant issues with the existing line were reliability and noise due to improperly designed 90-degree turns and curves. Chains wore out prematurely and could jump out of the track during a line re-start, because the curves had too few magnets to hold the chain in place as it was pulled around a curve. Carl Killingbeck of Merley Chain, Emerson’s master distributor in Milton, Ont., diagnosed the problem and recommended double-magnet curves made of ultra-low-friction Nolu-S as part of a complete changeover to a dry running operation with System Plast NG chain.

System Plast NG chain is made of high-performance PBT thermoplastic with the lowest coefficient of friction in its range, delivering medium strength, optimum wear resistance, reduced plate wear and reduced pitch elongation. The flat conveyor chain is suitable for high-speed and dry running applications, where it lowers power consumption and noise, and increases belt fatigue factor by up to 60 per cent. It complies with the Code of Federal Regulation published by the Food & Drug Administration and Directive 202/72/CE of August 2002 related to materials in direct contact with food.

Nolu-S wear strips and guides, which are FDA approved, enable reduced-lubrication, high-speed conveyor operation. They are made of a compound of UHMW-PE with a solid lubricant, which dramatically reduces the coefficient of friction, maintains UHMW characteristics, and has higher thermal conductivity. Nolu-S reduces noise and squeaking, reduces chain pull, extends chain life, does not damage or scratch PET bottles, and reduces energy consumption.

“The double-magnet curves and reduced frictional resistance in the curves ended the problem of the chain jumping out of the track,” said Larraguilbel. “As a result, in the first six months after the changeover, our production increased nearly two per cent, adding about $26,000 to our output. This alone more than paid for the cost of the new chain.”

Larraguilbel points out that operators clean the conveyor when processing high-sugar-content wines, because sugary wine spillage sometimes acts as an adhesive if the conveyor is stopped for an extended period. This can lead to a chain break when the conveyor re-starts.

“This is a minor issue compared to soapy water everywhere,” Larraguilbel stressed, “and easily justified to maintain a much higher level of operational efficiency, safety and sanitation.”