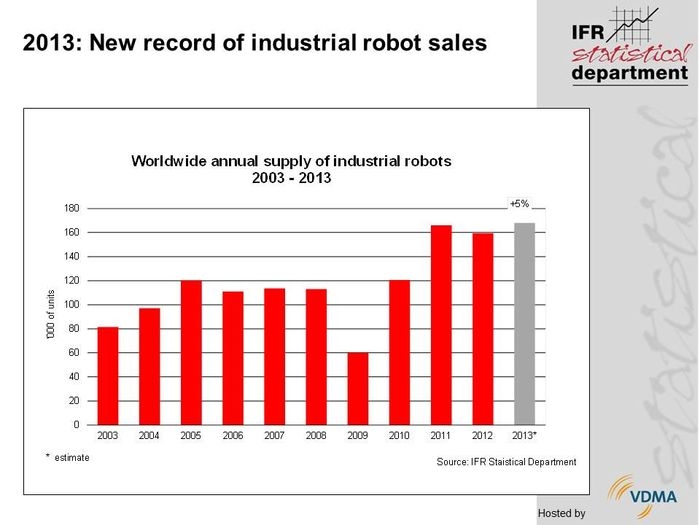 The global demand for industrial robots reached an all-time high of about 168,000 units in 2013, which is five per cent more than in 2012, according to quarterly statistics from the International Federation of Robotics (IFR).

The stats reveal that robot sales to the Americas continued to increase due to necessary automation processes in the North American industry, while robot sales to Asia rose considerably due to strong demand from China, South Korea and other growing Asian markets. In the fourth quarter of 2013, the start of recovery in the euro-zone pushed robot demand substantially. Due to the rather weak development in the first three quarters, robot sales in Europe stagnated in 2013.

Between 2010 and 2013, the annual increase of global robot sales was about 12 per cent on average despite the critical economic situation in some key countries.

“One basic reason for the continuous growth in the use of robotics is its never-ending technological development in relation with market and industrial requirements, accounting for product quality and competitiveness, as well as safe processes,” explained Arturo Baroncelli, IFR president.

Joe Gemma, IFR vice-president, added: “Those of us in the industry are not surprised by the growth, as many factors have contributed to the increase use of robotics worldwide…The software to work with and run robots and automation cells has developed rapidly over the last few years, and the ease of use has transcended into more applications under a very demanding and dynamic manufacturing landscape that would not have been tackled in the past. This has enabled manufacturers to provide products to the market quicker and with flexibility of variations to meet consumer demand and at the same time ensure the quality required and the performance demanded. Additionally, development tools have enabled more R&D variations on traditional product portfolios and has provided the possibility to ‘push the envelope’ to bring more innovation quicker to the marketplace…These changes and others have contributed to the advancement and increase for worldwide demand for automation solutions.”

Related
Manufacturers’ sales drop, but still ahead of 2009 levels, according to PTDA
Economic growth in Canada to resume in the second half of 2009
Canadian employment up in June
Auto sales up in Canada: PwC/DesRosiers report