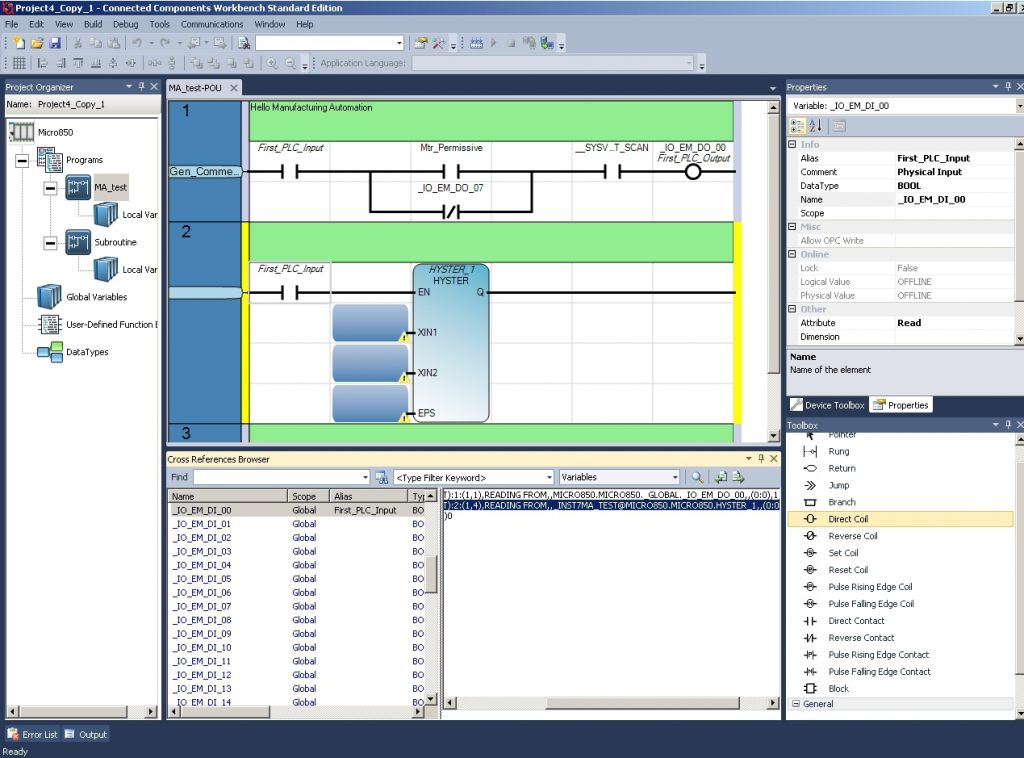 A screenshot of the Connected Components Workbench IDE workspace canvas

I have never thought of myself as being “out of a loop,” but I fear I have been.
By all accounts, the Connected Components Workbench (CCW) has been around for a few years. It is a free programming and monitoring platform for Rockwell Automation’s Micro800 PLC product line, which supports certain HMI platforms, as well as drives, soft starts, safety devices and expansion modules for the Micro800 system.

My first impression is that it still needs some work. The software is based loosely on the IEC-61131 programming specification and includes three of the five languages — Ladder Diagram (LD), Structured Text (ST) and Function Block (FB). It supports user-defined FBs and data types.

I installed the DVD in a Windows 7 Professional virtual machine, and while everything runs, it is a bit sluggish, suggesting that the more horsepower you have the better.

The interface is very clean, but busy. There are tons of options for controllers, setup and devices, which is nothing new for a seasoned ControlLogix user. But if you haven’t ventured into that arena, it might be slightly intimidating.

There is a plethora of assistance for this product. Guides, sample code and a very intense help file can take the user anywhere they want to go. Having said that, IEC-61131 is not as widely accepted in North America as it is in other parts of the world. In my experience reviewing other IEC software integrated development environments (IDEs), it has always been a tedious transition for an RSLogix user. Is this time different?

I would suggest yes. The environment is way different than anything else that Rockwell has developed. I was disappointed that the free-form keyboard editor is not present. There are, however, keyboard shortcuts that are non-intuitive. But as you learn the more important shortcuts, they provide some time savings. So really, this is a mouse and data entry-based IDE.

The IEC specification involves data types, language integration, program organizational units (POUs), user-defined function blocks, etc. It is not the same as RSLogix, so there will be a learning curve.

It took awhile to install. It requires Windows XP/7/8. I tried installing it on XP SP3, but didn’t record the error message. So Win7 it was.

It is visually pleasing, with the ability to configure how many slices of bread it can toast at once. The help system is full, complete and may even provide too much information. It is context sensitive, which means that help is provided on the object that the cursor is on at the time.

Based on my experience with IEC IDEs, I get the feeling that Rockwell did not want to fall flat with their effort, so effort was put in.

For a simple tour, a local variable is associated with a given POU, while a global variable is the hardware, along with any data you need to see from all POUs. An understanding of the IEC approach is somewhat helpful here. The toolbar views can clean up the display if your video resolution doesn’t allow for a lot of canvas viewing space. For whatever reason, you can’t view the instruction address/variable alias (formerly known as a symbol) along with the comment (formerly known as address comment) on screen. As of this writing, I haven’t figured out how to get it onto the printed documentation either. Drag and drop is active, but for some reason it doesn’t allow the copy function. And don’t be fooled with the grid layout. You can place many commands on a single rung. I didn’t bother to find out how many, but as with most hardware platforms, it would be limited by the PLC’s/PAC’s firmware.

Single click and double click take you to different places, which is just something you have to get used to. Instructions that need attention are indicated by a small yellow triangle. A major advantage of the IEC platform is the ability to abstract certain actions through the use of function blocks. And with the ability to integrate HMI, motion and drives into a complete platform IDE, this one-stop programming environment deals with all of the hardware components.

This isn’t new. Many companies have been using IEC-based systems forever, and include this integration, but they don’t have near the market share that Rockwell has. So by learning about this tool, it may in fact give users a better feeling about trying out the other guys. Regardless of whose hardware platform you use, get a copy of this software and learn some of the attributes. Consider it an investment!

Jeremy Pollard (jpollard@tsuonline.com) has been in the industrial automation industry for more than 25 years. He has worked as a systems integrator, consultant and educator.

This column originally appeared in the March/April 2014 issue of Manufacturing AUTOMATION.