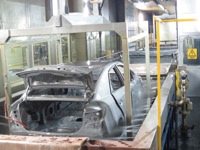 May 26, 2014 – We’ve all seen car crashes. Most of us have had one or two in our lifetime. But imagine a car crash where neither car has a steering wheel, or wheels of any sort. Hard to picture? Not if you are watching an assembly line in an automobile manufacturing plant. Needless to say, having cars crash before they have been completely assembled is not good for the bottom line.

That was the problem Automoviles del Ecuador S.A. (AYMESA) was experiencing in its Hyundai truck manufacturing plant in Ecuador.

AYMESA needed to improve the Electrified Monorail System (EMS) in its paint shop, specifically at the cataphoresis process, called ELPO. Cathodic electrodeposition, or cataphoresis, is a fully automated process of painting by immersion, which is based on the movement of charged particles in an electric field (paint) toward an oppositely charged pole (metallic surface to be painted). The equipment that gives the electric charge at the cataphoresis process is called a rectifier.

Before the paint is applied, the surfaces undergo a preparatory process that includes degreasing, phosphating and several rinses (see Figure 1). The main objective of the preparatory process and phosphate coating is to protect the surfaces from corrosion. This technique also allows areas that are hard to reach, such as recessed areas, and piping to be painted.

After the paint has been applied, the surfaces are heated to dry and cure.

The EMS transports car body carriers around a loop that travels through the 140-metre-long paint shop (see Figure 2).

At the paint shop’s loading station, a car body is loaded onto a mobile carrier, lifted five metres off the floor, and attached to the EMS. The car body is then run through 12 sequential stations. At every immersion station, the carriers stop to allow two on-board hoists to lower the car bodies into an immersion bath. When the process is completed at one station, the hoists lift the car body and the carrier moves along the monorail to the next station.

Every mobile carrier contains an on-board MicroLogix controller and three variable frequency drives (VFD) to operate the two hoists and two friction wheel travel drives. There is a stationary master CompactLogix L35E controller near the first loading station that sends commands through a conductor rail system.

“Also, because we couldn’t change the specific voltage in the cataphoresis process for different car models, it caused the smaller car models to have a thick coat of paint,” Padilla said. “This required extra time to sand down to keep our quality parameters.”

Padilla and his boss, Luis Olivo, the maintenance manager for AYMESA, heard about ProSoft Technology radios at a Rockwell Automation conference in Ecuador.

“We wanted to take advantage of the fact that we had mobile, on-board controllers for each carrier and to permit communication via Ethernet through a high-speed wireless network,” Padilla said.

However, the engineers had their doubts about the reliability of wireless networks in an environment surrounded by moving metal, since radio waves reflect off metal objects and bounce in all directions, causing multipath interference. The paint shop has metal walls and a metal roof. The carriers are massive steel objects, as are the car bodies they carry. All of these constantly moving metal masses result in an ever-changing radio frequency environment that is ripe for radio interference or corrupt data flow.

The new control system consists of one master radio connected to the PLC’s Ethernet network in which the main PLC is a part. Every independent EMS carrier has a local controller and a ProSoft radio acting as a repeater to establish wireless communication with the main controller. The six mobile carriers communicate with each other as well as with the master radio.

“Since this EMS application is time-critical, every repeater radio is connected with its parent master radio at all times to avoid switching delays from one master radio to another while the carriers are in motion,” Padilla said.

By opting for this wireless network, AYMESA was able to achieve several benefits, including:

• The implementation of a vision system consisting of a camera to identify the car model entering the paint shop. This, in conjunction with a new recipe system to set the immersion heights and the water spray times according to the car model, reduced processing time and optimized water consumption. Total processing time per mobile carrier was reduced by three minutes (six per cent).

• The ability to send time data and voltage data to the rectifier through the wireless network. Now, the rectifier gives a specific electric charge to each car model, eliminating over-painting on the smaller models.

• The ability to control the EMS system in real time, increasing its reliability and reducing downtime.

• The ability to implement remote control through a wireless keypad with a range of 100 metres to manually control each mobile carrier.

• Display of alarms of every mobile carrier at the PanelView in the control room.

• And, best of all, collisions between mobile carriers were reduced by 100 per cent, since with the wireless network, every carrier knows its position in relation to each other.

Danetta Bramhall is the commercial marketing manager for ProSoft Technology Inc., which specializes in the development of industrial communication solutions for automation and control applications.