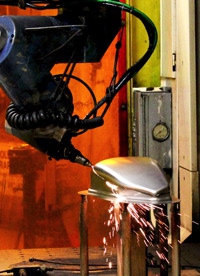 Terry Sammon, CEO of Grand Rapids, Mich.-based Mico Industries, is on a laser-focused mission to drive his company to create dies, weld fixtures and check fixtures without compromise, providing the highest possible level of products and service to his customers, all at the best price possible.

Mico Industries, established in 1983, is an engineering, stamping, assembly and welding company. Its customer base includes the Big Three automotive manufacturers, as well as the largest U.S.-based motorcycle manufacturer. These are Tier 1 customers who will not accept anything but the highest quality at an extremely competitive price. This is precisely the environment that Sammon and his company thrive in, even though they are sometimes stretched beyond their traditional product line.

When Sammon joined the company, which was founded by his mother, he began his career as a die-maker. He quickly realized that the days of wax models, 3D tracing and blue prints were coming to an end, and that the future lay with CNC equipment for die manufacture. After purchasing several used CNC mills and a low-end CAM program, he realized that there were more powerful software tools available that would maximize his company’s efficiency and capability. He initiated a test program for nearly every CAM system on the market and, when he discovered the integration between SolidWorks and SolidCAM, and saw SolidCAM’s iMachining in action – cutting steel as though it was aluminum – he decided to purchase the complete system.

Sammon remembers the event that prompted him to buy SolidCAM and SolidWorks: “A project we programmed with our old CAM system involved a block of tool steel, which took 14 hours to machine. We did the same 2D project using SolidCAM and SolidCAM’s intelligent tool path generator, iMachining, and it took under two hours to cut – an incredible result.”

The objective at Mico is to produce the best quality dies for its customers, prompting it to expand into 3D CAD/CAM. Sammon decided to learn SolidWorks and SolidCAM at the same time.

“SolidCAM’s ability to run right inside SolidWorks definitely shortened my learning cycle. It was really like learning one program with two very powerful functions. I won’t say it was easy, but my philosophy is never give up, so eventually, SolidWorks just clicked and SolidCAM pretty much fell into place.

“Since I have a traditional machining background, I needed to learn CNC. I am now on a first name basis with the support team at SolidCAM, and they have been a huge help in getting me up to speed,” he said. “They are all machinists and speak ‘CNC mill,’ giving me valuable advice to make sure I’m on the right path. The videos on the website have also been a major help. But what really has made the most impact is the online meetings we do with GotoMeeting. I have even put a shortcut on my desktop so that when I call them, we just start an online meeting, and they show me a solution. This is even better than having a local support guy, as I can talk with multiple SolidCAM machining specialists in one session and don’t have to wait for someone to come to my facility who may not know the solution for my issue.”

Once Sammon became proficient with SolidWorks and SolidCAM, SolidCAM’s iMachining really started to have a huge impact on Mico’s CNC operations.

“With iMachining’s faster cycle times, decreased tool wear and intuitive Speeds and Feeds Wizard, it’s like having a master machinist with a super-fast CNC mill using super-wear tools always at my disposal. The first time I machined a block of D2 tool steel with iMachining, my toolmakers’ jaws just hit the ground. They couldn’t believe the speed and depth of cut we were running at and the amazing material removal rates we were achieving.”

Sammon said he typically sees a 40 to 50 per cent decrease in cycle time using iMachining. However, the benefits of iMachining do not stop just with faster cycle times.

“iMachining has paid for itself many times over with greatly increased tool life. For example, on half-inch helicals we get a 40 per cent increase in tool life.”

The iMachining Wizard is another key benefit.

SolidCAM with iMachining gives Sammon the tools he needs to drive his company to create dies, weld fixtures and check fixtures without compromise, providing the highest possible level of products and service to his customers, all at the best price possible. Truly a mission accomplished.