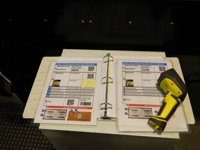 The DataMan 8100 wireless reader (right) has played a key role in improving productivity at Unico Systems by automating the data entry process.

July 4, 2014 – Unico Systems, a manufacturer of home air conditioning and heating systems, previously used manual methods to track manufacturing workflow, a time-consuming task that increased the chance for errors. Today, the company automatically enters the tracking information into a database using Cognex wireless handheld scanners to read barcodes on the product, and QR codes on employee badges and assembly stations. Operators now spend much less time on data entry tasks which, along with other improvements, has helped increase the production rate on the company’s lines by an average of 40 per cent. The new system also provides additional safeguards to ensure that only quality products are shipped to customers, resulting in a reduction in warranty costs. Here’s their story:

The company
Unico systems enable virtually all hot water and steam heated structures and other difficult installations to be centrally air conditioned and heated without a major sacrifice in space. The system’s flexible, insulated duct thread runs through, over, around, between and under existing inner wall structures so it can be adapted to the unique situation of the structure rather than requiring costly and inconvenient remodelling. A high velocity stream of air is delivered quietly and seamlessly into the room using two-inch room outlets or an eight- by .75-inch slotted diffuser. The inconspicuous room outlet can be positioned in ceilings, walls or floors. The modular air handlers and coils can be easily installed into attics, ceilings, crawlspaces and closets.

The challenge
Unico heating and cooling systems are produced on three lines used for blower assembly, coil assembly and final assembly. In the past, the company printed labels with tear off stickers and serial numbers that were attached to each major subassembly or component at the beginning of the line. Operators at each station tore off a sticker as they completed work on the product. They placed the sticker in a book in which they also recorded other information such as test results and the time when the operation was completed. The data recorded in the book was later keyboarded into an Excel spreadsheet. The limited amount of information that was recorded and the difficulty of accessing the information either on paper or in the spreadsheet reduced the value of the data.

“We were concerned about the amount of time that operators were required to devote to data entry and its impact on manufacturing productivity,” said Steve Intagliata, vice-president of operations for Unico Systems. “We were concerned about the potential for manual data entry errors and also wanted to record greater amounts of data than could be accommodated with a manual process. It was clear that we needed to automate the collection of data on our manufacturing process.”

The solution
Unico approached HTE Technologies, a multi-division distributor that provides products, technical assistance and support services for motion and control, production and maintenance, power and process equipment and metal finishing. Scott McBrady, director of technology at HTE Technologies, designed a custom manufacturing data system that uses a handheld scanner at each station in each line to record the model and serial number from the assembly, the employee badge and the station number.

“The ID readers were critical to the success of the manufacturing data system,” McBrady said. “Yet the stations are difficult to reach with conventional cables and there is moving equipment in the area with the potential to tangle up the cables. Reliability of the ID readers is also critical because downtime has the potential to substantially reduce throughput of the line. We have seen reliability issues with some wireless ID readers. We selected Cognex DataMan 8100 readers for this application because we have used them on several previous projects and they have provided near 100 per cent uptime.”

The DataMan 8100 wireless reader provides a working range up to 100 metres with sufficient memory capacity for reading codes when offline or out of range. It supports industrial protocols for both corded and cordless models, allowing for easy integration, reduced installation costs and remote access to diagnostics. Common to all DataMan 8000 series models is the system’s modular design that allows any reader to be easily switched between corded RS-232/USB communication to industrial Ethernet or to wireless using field exchangeable interface modules. Cognex Connect makes it possible to communicate via industrial protocols such as EtherNet/IP, Profinet and MC Protocol, in addition to traditional support for USB and RS-232.

HTE Technologies wrote software in the Microsoft C-Sharp programming language that communicates with the Cognex ID readers to capture all of the information needed on the manufacturing process. A key advantage of the new manufacturing data system is that it records the time of each data entry step, making it possible to accurately record the cycle time of every manufacturing operation.

For example, at the first station in the blower assembly line — the motor test station — the operator scans his or her employee badge, scans the station and scans the barcode on the motor with its model number and serial number. Then the operator runs a test that measures the amount of current drawn by the motor during operation. The motor test machine is connected to the network, so the results go out over the network and are captured by the manufacturing data system.

The manufacturing data system records the amount of time consumed by each assembly process and the results of each inspection operation. This information is posted on a web page that managers access to keep their finger on the pulse of the lines, correct problems quickly and track continuous improvement programs. Unico engineers can easily make changes to the software, such as adding an employee to a station. Along with implementing the scanners and new software, Unico also improved the method of delivering materials to the line. When the material at a station drops to the safety level, the operator at the station pushes a switch that activates a light. The material handlers then are tasked with delivering the material within a certain period of time.

“We have seen a substantial improvement in productivity through the implementation of the scanners, software and other changes,” Intagliata concluded. “The biggest factor is the automation of the data entry task, which frees up operators to focus on assembling and testing the product, and has played a key role in increasing line throughput from 25 to 35 systems per shift. It is also much easier now to access information on our manufacturing process. We can see at a glance if a line has slowed or stopped, or if a bad part has been produced. When a part fails a test, a red light goes on and the line stops until the part is removed, so there’s much less risk that a faulty product will be shipped to a customer.

“The additional information provided by the manufacturing data system is also very valuable,” Intagliata added. “Managers can easily check the throughput of a line over any period of time up to and including in real time. This information helps us ensure that only the highest quality products are delivered to our customers, and keep our costs under control by continually improving productivity. The Cognex ID readers have played a critical role by providing near 100 per cent read rates and reliable operation without any significant amount of downtime.”

Robert Trask (robert.trask@cognex.com) is a territory sales manager with Cognex Corporation. He is a 15-year industry veteran with a background in vision systems, barcode reading, systems integration, material handling, marking/coding and marketing.