Aug. 22, 2014 –  In electrical engineering, power factor (PF) is the ratio of real power to the apparent power flowing to the load from the source. From a business standpoint, it’s important to understand how having a low power factor raises your factory’s power bill.

Power factor is measured between 0 and 1.0 (usually given as a percentage, with 100 per cent or 1.0 being unity), and is usually judged as either leading or lagging, depending on the position of the current waveform with respect to the voltage. If your facility’s PF is below a certain level (typically 95 per cent for many power companies), your provider will charge a reactive power fee. This is because a low PF represents an inefficient load source that is drawing reactive (i.e., “non-working”) power, which the utility has to make up for. Unless your facility can raise its PF to 95 per cent or above, you’ll continue to see this extra charge every month on your bill.

For maximum efficiency, power in an AC circuit is best used when the voltage and current are in alignment. However, in the real world much of your electrical equipment is probably delaying as it draws current; meaning that the current and voltage are instead in misalignment. In this case, your equipment has a level of inefficiency depending on how misaligned it is, causing it to draw more current to operate. Therefore, your PF value reveals how efficiently your AC power system and equipment are using power.

You can use these three aspects to derive the Power Factor. (See Figure 1.) 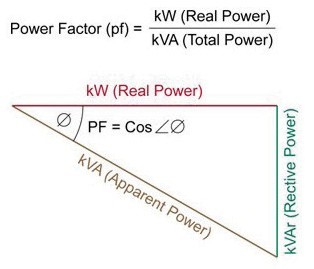 In an electric power system, a load with a low power factor draws more current than a load with a high power factor (near 100 per cent) for the same amount of useful power transferred. These higher currents increase the energy lost in the distribution system and also require larger wires and other equipment. In other words, your power factor percentage shows you how much of the total current is being used to do real work (i.e., a PF of 80 per cent means that a full 20 per cent of the current is non-working power). Again, because of the costs of larger equipment and wasted energy, electrical utilities will usually assign a penalty fee to industrial or commercial customers if they have a low power factor.

A high power factor is generally desirable in a transmission system to reduce transmission losses and improve voltage regulation at the load, so it’s often beneficial to correct the power factor of a system to near 100 per cent. When reactive elements supply or absorb reactive power near the load, the apparent power is reduced.

Motors driven by variable speed drives will use the same power as before, but may draw more current. Note that with reduced stored energy in the DC bus capacitors, they may be more vulnerable to power dips.

1. Lower electricity bills: PF correction is an actionable way to lower your utility bills. Savings can range from hundreds to tens of thousands of dollars per year, depending on the size of your facility.

2. Avoid utility reactive power fees: Utility companies routinely charge reactive power fees to consumers with low power factors. This can result in your bills increasing by up to 20 per cent, depending on which company is supplying your electricity.

3. Reduce carbon emissions: By utilizing power factor correction, you can also lower the amount of carbon emissions released into the atmosphere. This can be another great source of savings.

5. Achieve heat reduction in cables, switchgear, transformers and alternators, which in turn prolongs the lifespan of this equipment.

6. Reduce voltage drop in cables, allowing the same cable to supply a larger motor and improve the starting of motors located at the end of long cable runs. This also helps to avoid motor failure and damage to your equipment.

There are a few simple methods you can use to raise your PF without buying expensive devices. First, check your existing equipment to see if any pieces are operating above the voltage it’s been rated for. You can also cut back on how often your plant is running motors with a light load and avoid running idling motors for extended periods.

Linear loads with a low power factor, such as induction motors, can be corrected using a passive network of capacitors or inductors. In the electricity industry, inductors are said to consume reactive power and capacitors are said to supply it, even though the energy is really just moving back and forth on each AC cycle. For example, you can offset the inductive effect of motor loads by using locally connected capacitors. If a load has a capacitive value, connect inductors (also known as reactors in this context) to correct the power factor.

Capacitors prevent equipment from having to draw reactive power from the grid. Non-linear loads, such as rectifiers, distort the current drawn from the system. In such cases, you can use active or passive power factor correction to counteract the distortion and raise the power factor. The devices correcting the power factor may be located at a central substation, spread out over a distribution system, or built into power-consuming equipment.

Instead of using a set of switched capacitors, you can utilize an unloaded synchronous motor to supply reactive power. The reactive power drawn by the synchronous motor is a function of its field excitation. This is referred to as a synchronous condenser. Started and connected to the electrical network, it operates at a leading power factor and puts vars onto the network as required to support a system’s voltage or to maintain the system PF at a specified level.

For power factor correction of high-voltage power systems or large, fluctuating industrial loads, power electronic devices such as the Static VAR compensator or STATCOM are seeing increased use. These systems are able to compensate for the sudden changes of power factor much more rapidly than contactor-switched capacitor banks, and being solid-state they require less maintenance than synchronous condensers.

Summary
By using a device to identify the power factor of your plant or factory’s equipment, you can realize substantial savings, improve the efficiency of your electrical equipment, and help prevent shutdowns or delays due to overheating machinery. It may take some preliminary analysis and/or investment in energy-efficient equipment, but you can realize long-term energy savings by measuring your facility’s power factor and applying suitable PF correction techniques.

Related
Forum tackles green energy policy and the manufacturing industry
Can the Internet of Things drive the adoption of energy harvesters?
Lindt’s Canadian arm moves to 100% green energy
Energy efficiency is an area of improvement for heavy power consumers