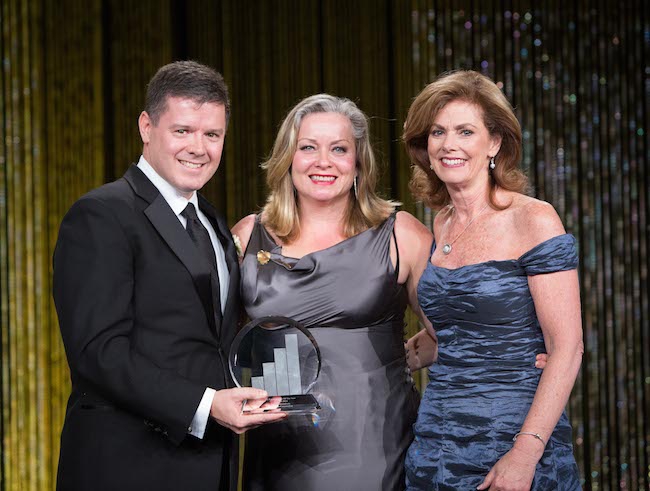 Dec. 1, 2014 – Linda Hasenfratz, CEO of Linamar Corp., has been named the winner of Canada’s EY Entrepreneur Of The Year 2014 award. Congratulations!

Now in its 21st year, the program honours the country’s “most impressive entrepreneurs from all areas of business,” describes EY, adding that finalists are chosen based on their vision, leadership, financial success and social responsibility.

According to EY, Hasenfratz (centre in photo) was chosen as the overall award winner for her inspiring work transforming and leading Linamar, an automotive manufacturing business headquartered in Guelph, Ont. She joined her family’s business in 1990 as a machine operator on the shop floor, where she learned the business from the inside out and built a growth strategy to “propel Linamar to new heights” after taking the helm as CEO in 2002.

“She’s cultivated a culture of investing in the company’s people and the future of the broader community,” said EY.

Hasenfratz accepted the award at a black-tie ceremony in Toronto, Ont., last week — an event that marked the culmination of five regional galas drawing more than 5,000 attendees nationwide. Next up, she will compete with 50+ other country recipients for the title of EY World Entrepreneur Of The Year in Monaco, June 3-7, 2015.

“If ever there was an entrepreneur who defied gravity — Linda Hasenfratz is it!” said Colleen McMorrow, EY partner and National Entrepreneur Of The Year program director (third from left in photo). “She’s quadrupled sales and grown the company’s workforce to 18,000 people during the most volatile times her industry has ever faced. She’s changed the game, and the results are amazing.”