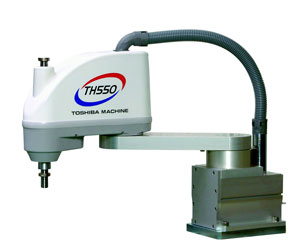 Toshiba Machine’s scara robots, the TH550 and TH850, extend the company’s TH Series line. The TH550 reaches composite speeds of 6.21 m/s, while the TH850 accelerates to 8.03 m/s. Three-axis speeds reach 2,000 mm/s for both. With a two-kilogram payload, standard cycle times for the TH550 are 0.33s, and 0.49s for the TH850. Maximum payload mass is five and 20 kilograms, respectively. Arm length of the TH550 is 550 mm, while the TH850’s arm extends 850 mm. The robots include a full-function TS controller that can control a maximum of five axes simultaneously. It includes a built-in PLC, an operation panel and a multi-task function.
Toshiba Machine Co., America
www.toshiba-machine.com