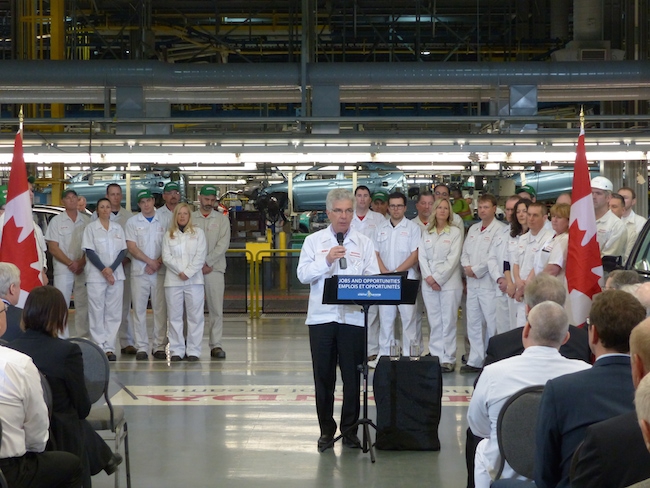 Mar. 30, 2015 – Honda Canada announced it plans to take advantage of the still-to-be ratified free-trade agreement with the European Union to produce vehicles for export to Europe for the first time.

According to Honda CEO Jerry Chenkin, the Canada-EU trade deal was the “catalyst” for the plan to export the next generation of the CR-V model for the European market.

“Exporting 40,000 Canadian-made vehicles per year to Europe is good for Honda and it’s good for Canada,” he noted. “This expansion decision was made possible due to our deep, mature, and rich talent pool with nearly 30 years of automotive manufacturing experience. We are so proud that our Canadian associates have the reputation of producing high quality vehicles that will meet the needs of the discerning European customer.”

“Europe will accept a great many Canadian-built cars — no less than 100,000 — thousands of which are going to be from right here at this plant,” Harper said.

The free-trade deal calls on Europe to scrap a 10 per cent tariff on passenger vehicles, but it remains unclear when exactly it will take effect. Canada now has free-trade agreements with 43 countries.

“It’s because our government negotiated a free-trade agreement that, in the years to come from this plant, cars built right here in Canada by a Japanese company will then be exported virtually tariff-free to Europe, one of the world’s wealthiest, richest markets.”

— With files from Colin Perkel, The Canadian Press