The move makes ABB the first global industrial robotics company to manufacture in Canada and U.S., it says 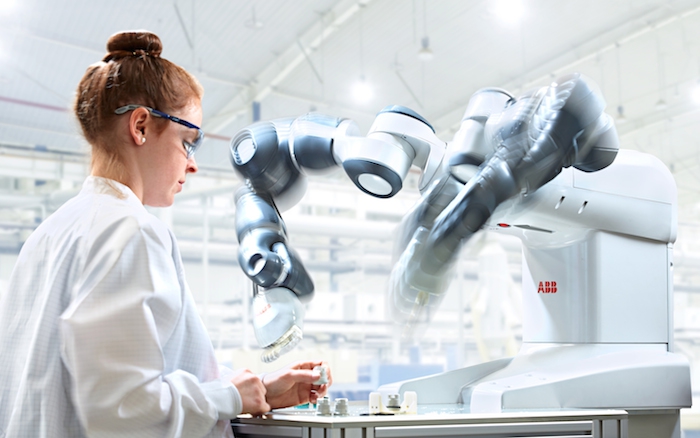 May 20, 2015 – The Robotics Business Unit of ABB has announced today it will start manufacturing robots in the United States, making it the first global industrial robotics company to commit and invest in a North American robotics manufacturing footprint, it says.

The company made the announcement at the opening of a new robotics plant at its facility in Auburn Hills, Mich. Production is to commence immediately.

The new plant is ABB’s third robotics production facility, alongside China and Sweden, and will manufacture robots and related equipment for the North American market.

“Today, we are marking and celebrating the next stage of our commitment and growth in North America with the start of local robot manufacturing in Auburn Hills, U.S.,” said ABB CEO Ulrich Spiesshofer. “Robotics is a fundamental enabler of the next level of North American industrial growth in an increasingly competitive world. Our leading technology of web-enabled, collaborative and safe robots will contribute to job security and quality of work.”

Per Vegard Nerseth, managing director of ABB Robotics, says the new North American presence elevates the company’s offering and service to robotics customers in Canada, the U.S. and Mexico.

“The expansion is consistent with our global strategy, which is to establish a local presence in key robotics growth markets to provide our leading technology to our customers,” he added.

The portfolio of products manufactured at the new facility will expand in phases, with the goal that most ABB robots and robot controllers delivered in North America will be manufactured in Auburn Hills. Localized manufacturing streamlines the delivery process and results in significantly reduced robot lead times for customers, it said.