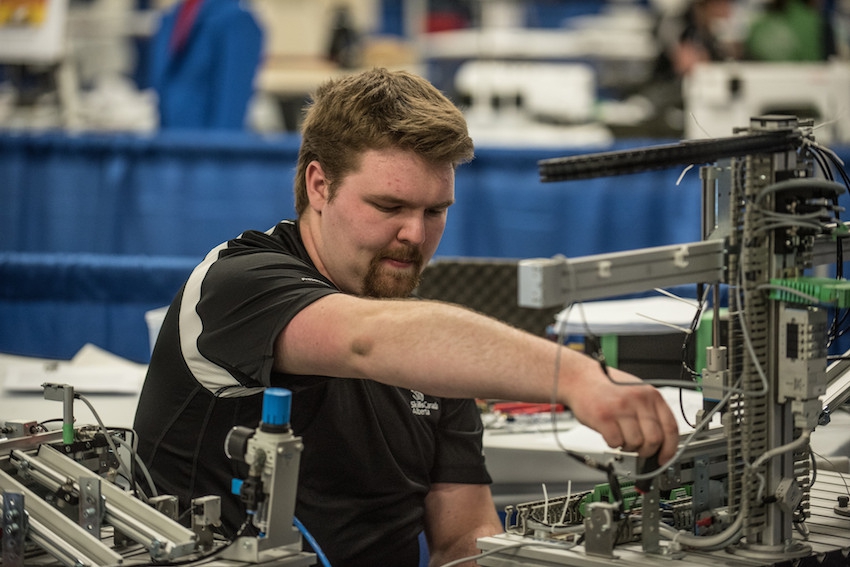 Jun. 16, 2015 – For two days in May at the 21st Skills Canada National Competition (SCNC) at Prairieland Park, Sask., the best and brightest students and apprentices in skilled trades and technologies were tried, tested and judged.

Over 500 young Canadians showcased their talent, reaching for gold by competing in over 40 disciplines across six industry sectors in front of a crowd of thousands.

SCNC is the only multi-trade and multi-technology competition for young students and apprentices in the country. The Olympic-style event draws competitors from every province and territory. Competitors are evaluated by independent judges from a cross-section of sectors that demand a pool of skilled workers. The judges’ decisions are based on industry standards.

In an interview with Annex Business Media, Shaun Thorson, CEO of Skills/Compétences Canada said, “We really want to have a focus towards visitors and students from the surrounding area that maybe have had no exposure to any trade or technology. This event, through our Try a Trade and Technology activities, gives them a chance to try some of these occupations.

“So they can try to build a brick wall, wire a circuit board or weld a couple of pieces of metal together — and that, combined with the high level of complexity level of the competitions which they see – provides a good recipe for why they should consider a career in trades and technology.”

At the Prairieland Park Grandstand, during the medals presentation and closing ceremony, Thorson, addressed the competitors.

“To those who return home with gold, silver and bronze in your hands, we salute you for your perseverance and congratulate you on your win,” said Thorson. “We applaud all the competitors who walked through the doors on that first day of competition. You gave it your all. You demonstrated tremendous pride in your craft and in your ability and you showed unbreakable determination to be the best you can be.”

“We also want to acknowledge the ongoing support from the Government of Canada and from our partners,” said Thorson.

“Thank you for working with us to build a solid future and robust workforce for young Canadians – like these tenacious competitors – who choose a lucrative career in skilled trades and technologies.”

Thorson was joined by Pierre Poilièvre, minister of Employment and Social Development Canada, at the closing ceremony.

“While touring the competition floor, I met some incredibly talented young Canadians,” said Poilièvre. “They represent some of the best this country has produced in skilled trades and technologies, and they represent our potential as a country. These tradespeople confirm why we continue to invest in apprenticeships and skills training. We need to get these skills, the skills employers are looking for and the skills that are in demand, into the talented hands of our bright young Canadians.”

At SCNC, Poilièvre also had the opportunity to meet with members of WorldSkills Team Canada 2015 competitors, the contingent of extremely talented individuals who are poised to compete in Brazil this August against more than 70 other countries at the 43rd WorldSkills Competition, in São Paulo, Brazil. They attended SCNC as part of their intense training regime.

Also attending SCNC to boost morale, spread the hype and raise awareness of the importance of connecting youth with skilled trades and technologies training were HGTV star Sherry Holmes; president of the National Board of Skills/Compétences Canada, John Oates; Larry Slaney of UA Canada; and, representatives of TransCanada.

The 22nd Skills Canada National Competition is set to be held in Moncton in 2016.