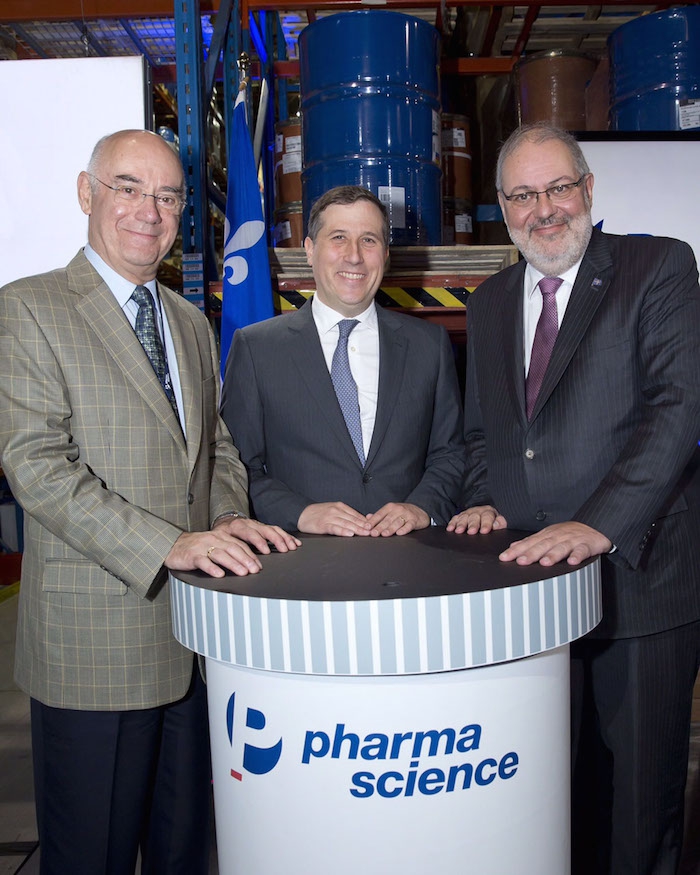 Jul. 14, 2015 – Morris Goodman, chairman of the board and co-founder of Pharmascience Inc., and Dr. David Goodman, CEO, announced the company will invest a total of $55.7 million by the end of 2016 to modernize its R&D facilities and increase its production capacity in Montreal, Que.

The announcement was made in the presence of Jacques Daoust, minister of the economy, innovation and exports, and Pierre Arcand, minister of energy and natural resources and MNA for Mont-Royal. The investment is made possible by financial contributions of $4 million from Investissement Québec and $800,000 from Emploi Québec, which will enable Pharmascience to pursue a “diversification strategy based on the development of new products and an increased international profile,” it said.

Both Morris and David expressed their appreciation of the Government of Quebec’s support, which will greatly assist Pharmascience in its efforts. Of the $55.7 million, $8.2 million will go towards the modernization of the company’s R&D facilities to facilitate the development of new products for international markets. The additional $47.5 million will support new production, packaging and quality management technologies to better meet the growing global demand for the medications the company manufactures, while also enhancing its competitiveness, it noted.

“We are proud of the progress we have made since 1983. Pharmascience is now the largest employer in the pharmaceutical sector in Quebec, and the third-largest in Canada,” said Morris. “The investments we are announcing will help create 65 new jobs, and help secure the existing jobs based in Greater Montreal.”

Since the company was founded, over $500 million has been invested in R&D, said David.

“[This] announcement reflects our ongoing commitment to pursuing growth with the objective of becoming a world leader in pharmaceutical manufacturing, while also being recognized as a multifunctional centre of R&D excellence. Our goal is to increase our presence both internationally and in the innovative drug market,” he continued.

Established in 1983, privately-owned Pharmascience is a retail generic manufacturer with a workforce of 1,623 employees — 1,546 of which are based in Quebec.