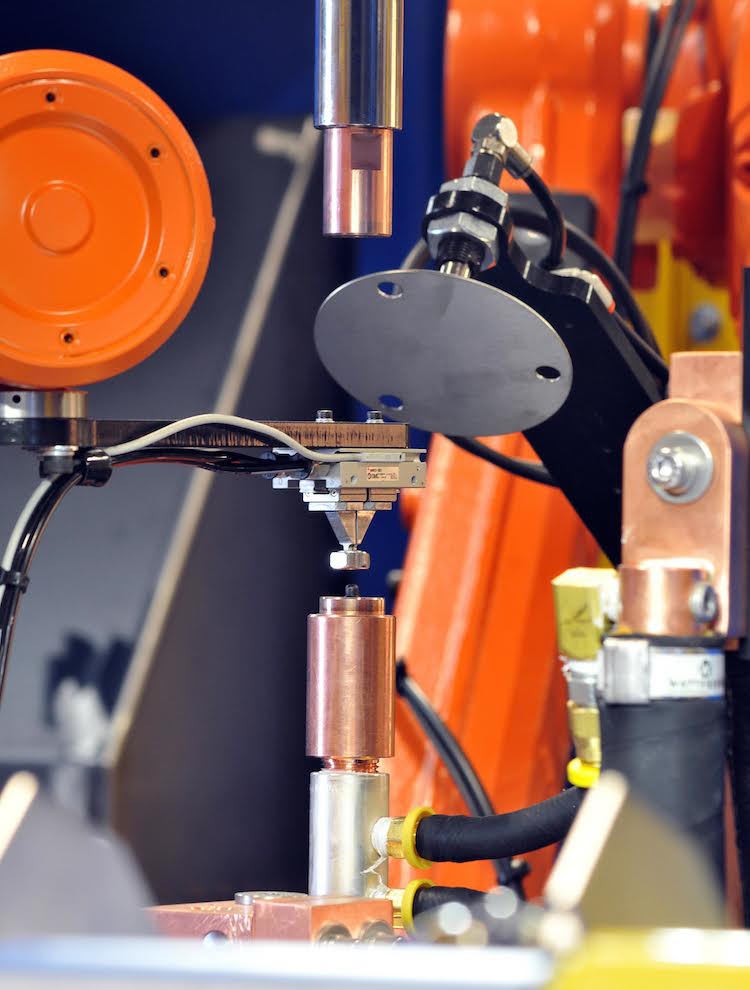 Jul. 27, 2015 – Nut welding is required in many high volume manufacturing industries to attach a fastener to a part so that an assembly can be completed.

Nut welding is commonly performed on machines that require an operator to position the part in a special fixture then load the nuts and activate the welder. This approach requires a significant capital investment for each unique part and also requires a dedicated operator for each machine. D&D Automation has developed a new Vision Enabled Robotic Assembly cell (VERA) that uses two vision-enabled robots to handle multiple parts and multiple nut sizes without requiring the fixtures or the full-time attention of an operator.

The vision system identifies a part traveling down a conveyor, and a robot picks up the part in order to position it on the welder. A second vision system then identifies the proper sized nut and a second robot positions it onto the part. The robot can position multiple nuts of different sizes for a single welding operation. A resistance welder then welds the nuts onto the fixture. This new approach requires only 25 per cent to 50 per cent of an operator’s attention and can handle many different parts without requiring special fixtures.

Nut welding challenges
Welded nuts are one of the most common methods of fastening parts and are used heavily in the automobile, appliance, consumer products and medical equipment industries as well as many others. Nuts are typically welded to parts using automation cells with a fixture designed specially to hold the part and nuts in position on the welder. The operator takes a part out of a bin, loads it in the fixture, steps back and hits two safety buttons. With the operator out of the way, the machine clamps the part in place. The operator then walks forward and takes nuts out a bin and loads them into position on the fixture. These cells are typically used to weld only one nut size due to the risk of the operator cross-loading nuts of different sizes and producing scrap parts. After loading the nuts, the operator again steps back to press the safety buttons and a resistance welder is activated to weld the nuts to the part.

Currently, quality assurance within the nut welding process requires a separate cell for each type of part that is to be run at the same time. Special fixtures are needed for each part because if the operator were to manually position each part, quality could be compromised. Each cell requires an operator as well as its own maintenance costs and upkeep. Some parts require multiple nut sizes to be welded on for future connections, which generally requires separate feeders, tooling and hardware for each nut size. In some cases, multiple nut sizes require completely separate cells. Cells can potentially be repurposed for new parts, but this is usually not done because the original machines are needed to build aftermarket parts in smaller volumes. Separate cells are often used for different size nuts because of the risk that an operator could take a nut from the wrong bin or the bins could contain some incorrect nut sizes.

D&D Automation is primarily a controls integrator that designs and implements programmable logic controller (PLC) based control systems for industrial machinery, manufacturing lines, process environments and other automated facilities. The company’s engineers originally had the idea of providing a pre-engineered solution for seam welding using vision-enabled robots. Seam welding involves putting two metal parts next to each other and running a welder along the seam. The challenge is that the welder needs to run right along the seam within a tolerance of less than a millimeter to produce good parts. With a traditional seam welder, it is problematic if the seam moves a millimeter to one side or the other as the final assembly will likely have to be scrapped. D&D developed a solution that uses a 3D vision system to track the position of the seam and provide instructions to a robot that follow the seam regardless of how much it moves. The prototype worked well but the first potential customer that D&D showed it to said: “This is very nice but our real problem is nut welding.” The seam welder remains a viable technology but D&D’s focus has shifted to fasteners. D&D engineers then went back to the drawing board and applied their vision enabled robot assembly (VERA) technology to the nut welding problem.

How new VERA nut welding cells works
To begin, a single operator loads parts onto an infeed conveyor and a vision system mounted above the conveyor identifies the part using the Cognex PatMax pattern recognition algorithm. D&D engineers used the Cognex EasyBuilder user environment to program the vision operations. Configuring the system to locate and identify a part is as simple as capturing an image of each part. The vision system is programmed to look continuously for all of the parts being run. When PatMax recognizes a part in the image, it signals the PLC to stop the conveyor. The vision system then captures another image to determine the exact location and orientation of the part, and passes x, y, and theta coordinates to the robot controller, which directs the first robot to pick up the part and place it on the resistance welder. A special fixture is not needed because the robot places the part much more accurately and repeatedly than could be accomplished by a human operator.

A second vision system then examines the assortment of nuts on a nut handler and picks out a nut of the proper size again using the PatMax pattern recognition algorithm. This vision system also sends a signal to stop the nut handler and the vision system captures a second image of the nut to accurately determine its position. Because of the nut’s symmetrical geometry, there is no need to determine the orientation of the nut. A second smaller robot then picks up the nut and positions it correctly on the part. The vision system can identify and the robot can pick as many nuts as are needed to complete the assembly, regardless of the size or shape of the nuts. After each nut is in place, the PLC actuates the resistance welder. The first robot then indexes the part for the next nut, or removes the part from the welder after all the nuts are in place and puts it on an outfeed conveyor.

Running at a 20-second cycle time, the system is expected to produce a total of 400,000 each of two part numbers in its first year of operation and is capable of producing a total of 800,000 parts per year at full capacity. This system will require only 50 per cent of the attention of one operator who will spend the other 50 per cent of his or her time operating another cell. All the operator has to do is load parts onto the inflow conveyor from a bin and offload parts from the outflow conveyor into another bin.

Advantages of new approach
Most manufacturers have a large number of parts that require nut welding and a different cell for each part. With the new approach, each flexible cell can accommodate an unlimited number of different parts and nut sizes. By designing a cell this way, the only variable is how many parallel cells are essential to meet the desired production. The new D&D Automation VERA™ cells also provide full redundancy in the event of maintenance shutdown. The typical cell can handle any size part from 4 to 36 inches in its longest dimension. There is no limit on the number or the size of the nuts. If four cells were set up together, one operator could run all of them. The new approach uses vision-enabled robots to substantially increase productivity and reduce the costs involved in nut welding.