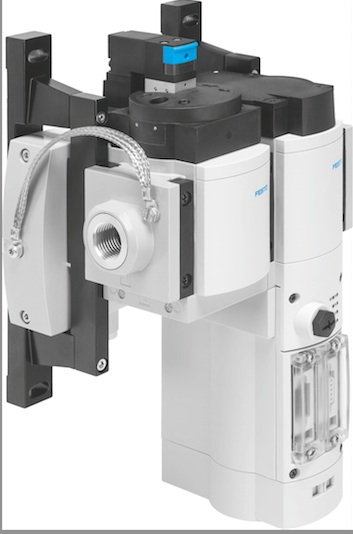 The capabilities of the service unit claim to “far exceed” those of conventional compressed air service modules. The MS6-E2M, or E2M for short, monitors and regulates operating parameters such as flow and pressure automatically, which in turn works to optimize air usage. The company says the unit is a critical instrument for detecting and reporting anomalies that would suggest leaks in the machine or piping. According to Festo, the E2M helps reduce the consumption of compressed air by cutting off the flow of compressed air, “preventing any from escaping through leaks on the machine,” it notes. In shut-off mode, it continually checks for leaks and if it detects a greater than allowable pressure drop in the piping system, it alerts the plant control system. Measured values for flow rate, air consumption and pressure can be called up from the E2M at any time, it adds. The user can adapt the Festo E2M to each installation via a manual input device (MMI) or Profibus, specifying the parameters for detecting whether the machine is in a production run or not.