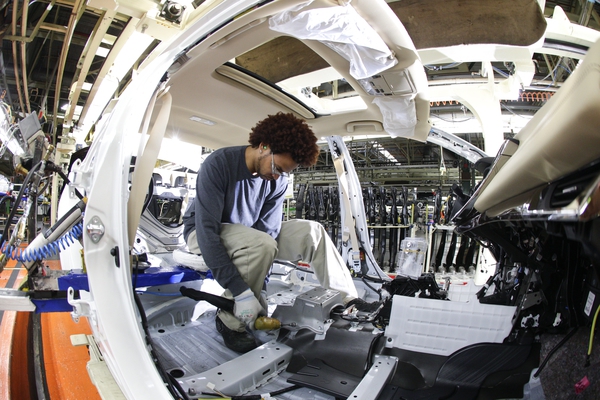 Nov. 10, 2015 – Toyota announced today that it will produce RAV4 vehicles in its Cambridge North Assembly plant in Ontario starting in 2019. With Lexus RX in Cambridge, and Toyota RAV4 in Woodstock, Ont., and Cambridge, Toyota Motor Manufacturing Canada (TMMC) will become a “North American hub for sport utility vehicles,” says the automaker. It also announced that it will be adding hybrid RAV4 production.

“The RAV4 and the RAV4 hybrid are great products for TMMC,” said Toyota Motor North America CEO Jim Lentz. “RAV4 is a leader in the fastest growing segment of the North American auto industry. We forecast that the segment will continue to demonstrate strong growth with the RAV4 being a major player.” Lentz also said that “producing additional RAV4s, a more upscale, more complex, higher content vehicle, fits well with TMMC’s well-earned reputation for quality.”

TMMC president Brian Krinock explained that “with a new platform and the latest technology, TMMC will have the flexibility to respond to the evolving needs of the automotive marketplace.” He also said that “bringing TNGA to Canada will propel us to the next generation of automotive manufacturing and provide the basis for our longstanding commitment to employment stability.”

When the project is implemented in 2019, the automaker will have been making vehicles in Canada for 30 years. “This investment will revitalize our plant and create the foundation for our future success,” he added.

TMMC manufactures the Toyota Corolla, RAV4, Lexus RX 350 and RX 450h vehicles and is the first plant outside of Japan to build a Lexus vehicle. The company employs more than 8,000 team members across its three manufacturing plants in Ontario.