Employees participated in 2,200 hours of training to prepare for new press 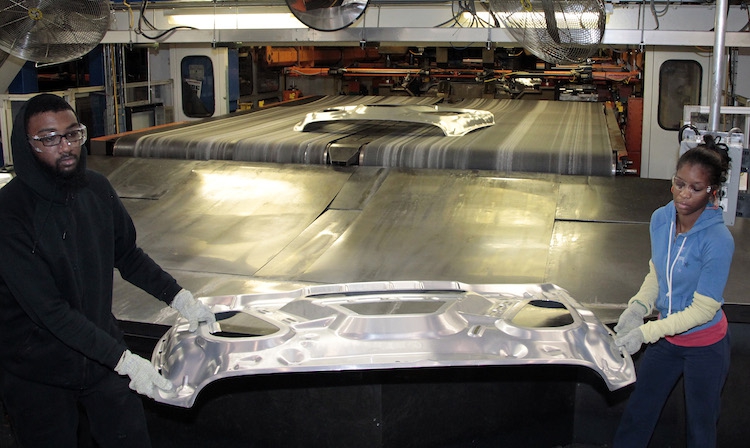 Jan. 25, 2016 – FCA US is celebrating the production start of its new press, a result of a $63-million investment to bring the “latest, state-of-the-art” technology to its stamping operation at the Warren Stamping Plant in Michigan. According to company officials, this is the first new press installed at the facility in 15 years.

The high-speed Servo Tandem Press technology (a 180-in. press line) is the first press of its kind at Warren Stamping and the only one currently in operation in the automaker’s North American stamping operations. Construction for the new press line began in spring 2014 and production launched last December. The new press line will increase capacity by up to 12,000 hits per day or approximately 3.6 million parts per year. In addition to the new press, Warren Stamping also operates 12 major press lines and three press lines, bringing total plant capacity to nearly 84 million parts annually. More than 2,000 employees work at the plant.

“The good news is that we needed to increase our stamping capacity because FCA keeps selling more cars and trucks,” said Harlow, referencing the best year of sales in the 90-year history of FCA Canada and the 69 consecutive months of year-over-years sales increases in the U.S. “All of this is great for the company, our workers and everyone associated with FCA. From the standpoint of our manufacturing operations, the new Servo Tandem line will help us meet this upsurge in demand.”

According to FCA, the new press increases the output rate, reduces complexity of the press, and improves reliability and maintainability, while also reducing energy usage at the 65-year-old facility. The press’s servo drive allows for 100 per cent programmable control and movement of the ram speed at any position in the press stroke unlike a mechanical press that operates at a fixed speed, it notes. This technology also boasts maximum flexibility by allowing die changes more frequently and more quickly, in about four minutes as compared to 20 minutes with older presses, says FCA. The Tandem Press is multiple presses in line in series, under which a single die is positioned in each press to perform an incremental function to make the stamped part.

World Class Manufacturing (WCM) principles were implemented to ensure a successful production launch, including engaging employees involved in the operation of the new press in its design and installation from the beginning. WCM is a methodology that focuses on eliminating waste, increasing productivity, and improving quality and safety in a systematic and organized way. WCM was first implemented by Fiat in 2006 and introduced to Chrysler Group as part of the alliance between the two companies in June 2009. More than 100 employees went through 2,200 hours of training at the World Class Manufacturing Academy, also in Warren, Mich., and at the plant in preparation for launch.

“Installing a new press line is always a major undertaking,” said FCA North America’s vice-president of manufacturing, Brian Harlow. “However, completing installation of this new press line while continuing to run the plant at peak capacity was an exceptional challenge and a tremendous accomplishment.”

Harlow commended the employees for safely and successfully completing the installation while sustaining production at such a high level throughout the rest of the plant. He also acknowledged their commitment to the implementation of WCM, which resulted in the plant receiving the bronze designation in October 2014.

“You have taken an active role in implementing WCM, a system that could not succeed without your personal commitment,” said Harlow. “It is because of you that Warren Stamping became the first stamping plant to achieve bronze status, which is an important WCM milestone.”

A WCM bronze award is given to a plant after completing a two-day audit during which it earned a minimum of 50 points in 10 technical and 10 managerial pillars by demonstrating clear WCM know-how and competence through employee-conducted pillar presentations and a review of projects that have been implemented across the shop floor.

The Warren Stamping Plant, which has been in operation since 1949, provides parts stamped from sheet metal, including hoods, roofs, liftgates, side apertures, fenders and floor pans, for a variety of vehicles built at seven of the company’s facilities including the Dodge Grand Caravan and Chrysler Town & Country, Windsor Assembly Plant in Ontario. These parts are delivered to the assembly plants, then welded together in the body shops to form the frame of the vehicle.

Warren Stamping will also support the launch of the all-new 2017 Chrysler Pacifica, which is scheduled to start production in the first quarter at the Windsor Assembly Plant.

Photos and video courtesy FCA US