May 5, 2005  by Manufacturing AUTOMATION 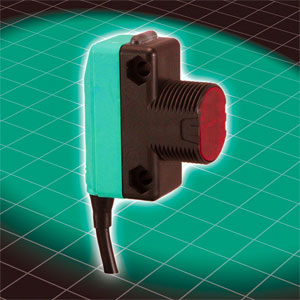 Pepperl+Fuchs introduces Tru-Vue series photoelectric sensors. These compact, low-cost sensors feature four-in-one output for simplified sensor specification and stocking, flexible side-mount or nose-mount options to satisfy various application needs, and highly visible 360-degree LED indicators for status indication in all directions, and from poor vantage points. Made in the U.S., Tru-Vue sensors are well suited for material handling, conveyor and assembly applications. Rather than having to stock multiple sensors with different outputs, Tru-Vue’s four-in-one output options (NPN light on, NPN dark on, PNP light on, PNP dark on) allow the engineer to specify and stock a single part for a given application. These sensors can be surface mounted, or can be mounted like 18-millimetre cylindrical sensors due to the threaded nose. Additionally their compact housing and barrel length makes them flexible enough to be mounted where conventional 18-millimetre cylindrical sensors cannot. Pepperl+Fuchs