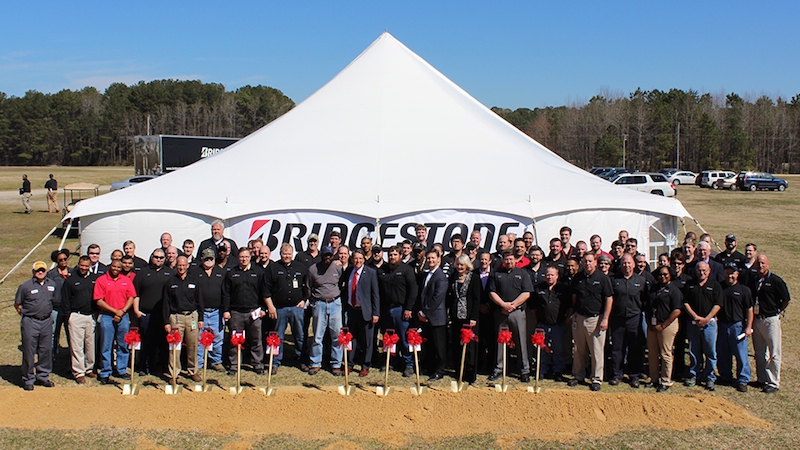 Phases one and two of the investment, which will total nearly $100 million, will focus on the addition of 167,000 square feet of manufacturing space to accommodate new tire assembly machines, materials handling systems, curing presses and associated equipment to increase plant capacity by 3,000 tires per day, bringing daily production to 35,000 by 2018, it says. The plant currently manufactures 32,000 passenger tires a day. According to Bridgestone, the new equipment also will allow the plant to respond to the increase in global demand for higher rim size tires, as well as improve quality and productivity while reducing costs.

“Today is a momentous day for all of us at the Wilson plant and across Bridgestone Americas Tire Operations, as we break ground on this important expansion that will allow us to grow our production and manufacturing capabilities to meet the changing needs of our customers,” said Michael Darr, plant manager, Wilson Plant. “We’d like to thank the Wilson community for its support over the last 42 years, and we’re excited to begin this next chapter in our plant’s history.”

This follows last month’s Bridgestone Canada announcement on the expansion of its Canadian passenger and light truck tire manufacturing facility in Joliette, Que. According to the company, the Joliette expansion is part of a five-year investment that could total upwards of C$300 million.

The company says the Wilson plant was the first Bridgestone tire manufacturing facility to produce run-flat tires. The facility last underwent an expansion in 1999, when it added 85,000 square feet to the facility. The plant team has achieved a number of safety awards, including marking the safest year in its 42 years of operations in 2012 – a record it broke in 2013 – and certification earlier this year as a Rising Star facility from the North Carolina Department of Labor. The plant also has received recognition for its environmental efforts, including three Green Factory Environmental Achievement Recognitions at Honda’s 22nd annual Environmental, Safety and Ergonomics Symposium in 2014. In addition, it earned ISO 50001 certification, reached Superior Energy Performance (SEP) Mature Pathway certification and achieved Underwriters Laboratories’ (UL) landfill waste diversion claim validation for Zero Waste to Landfill.