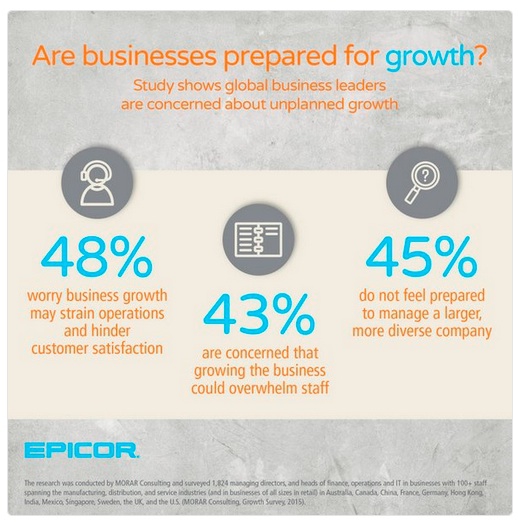 Mar. 22, 2016 – While organizations strive to achieve growth and profitability, new research from Epicor Software Corporation reveals a significant underlying level of anxiety exists among top business leaders regarding their company’s ability to succeed in the face of growth and change.

The company has unveiled the potential pitfalls of business growth, and the key concerns causing executives fear, uncertainty and doubt, when growth is unplanned — nearly nine-in-ten (89 per cent) organizations surveyed experienced growth that hadn’t gone exactly according to plan.

The research, which was conducted by MORAR Consulting and commissioned by Epicor, questioned more than 1,800 business leaders from 12 countries worldwide. Of those surveyed globally, 58 per cent of businesses reported growth in 2015 and nearly 70 per cent expect to grow in 2016, however only 11 per cent experienced growth totally in line with their plans in 2015.

Nearly 2,000 managing directors, and heads of finance, operations and IT were surveyed in Australia, Canada, China, France, Germany, Hong Kong, India, Mexico, Singapore, Sweden, the UK, and the U.S.

The business leaders surveyed admitted they often fear the consequences of growth, citing a number of negative impacts when growth is not planned for effectively. Nearly half (48 per cent) said they worry that business growth puts excessive pressure on operations, damaging quality and customer satisfaction. A substantial number of businesses (42 per cent) were also concerned that their business IT systems may prove unable to cope with managing a larger, more complex, business model. The top concern cited by CEOs was the perceived loss of customer intimacy that may come about as a result of growth.

Growth also poses a number of concerns about resource availability as business activities scale. Forty-five per cent of business leaders said that as a result of growth, they worry that their business might take on large or complex projects that they lack the skillset and technology to deliver effectively, damaging their brand reputation. They were also concerned that by growing the business, workloads may increase to a level that places too much pressure on staff, prompting key personnel to leave the organization (43 per cent). The vast majority of survey respondents said “market expansion and global expansion” would likely contribute to their company’s growth in 2016, and just under half (45 per cent) of business leaders polled worry they are not personally prepared for the challenges of managing a larger, more diverse business.

Confidence crisis is not unwarranted
Survey results show growth presents very poignant challenges that can threaten to undermine leaders’ abilities to navigate business strategy. Globally, significant levels of unplanned growth were more likely to be experienced by mid-sized businesses with 100-999 employees (37 per cent), than larger enterprises with more than 1,000 employees (29 per cent). Unplanned growth can bring challenges and pitfalls which nearly three quarters of businesses agreed are of at least some concern to them. Growth was most likely to be described as painful (in as many as one in 10 cases) by smaller mid-sized businesses (100-249 staff) as they make the difficult transition from small to mid-sized enterprises.

To support business growth, and prepare for its challenges better, 79 per cent of businesses believe that an effective and integrated IT infrastructure is essential. “This adoption of new technologies should position organizations to reap the benefits of newfound efficiencies and pave the way for growth,” said Malcolm Fox, vice president, product marketing, Epicor.

“Although the majority of businesses intend to grow in 2016, it’s clear that there are significant concerns with regard to businesses’ ability to deal with growth,” said Fox. “These concerns are not altogether unfounded, as our research shows even when businesses plan to grow, this growth can still surprise them; putting unexpected pressures on the organization. The proper time to prepare for growth is well in advance, as having an information framework to enable an organization to respond and keep pace in the face of growth has never been more vital.”