News Workforce
The man behind the PLC

A glimpse into the many facets of the esteemed Dick Morley 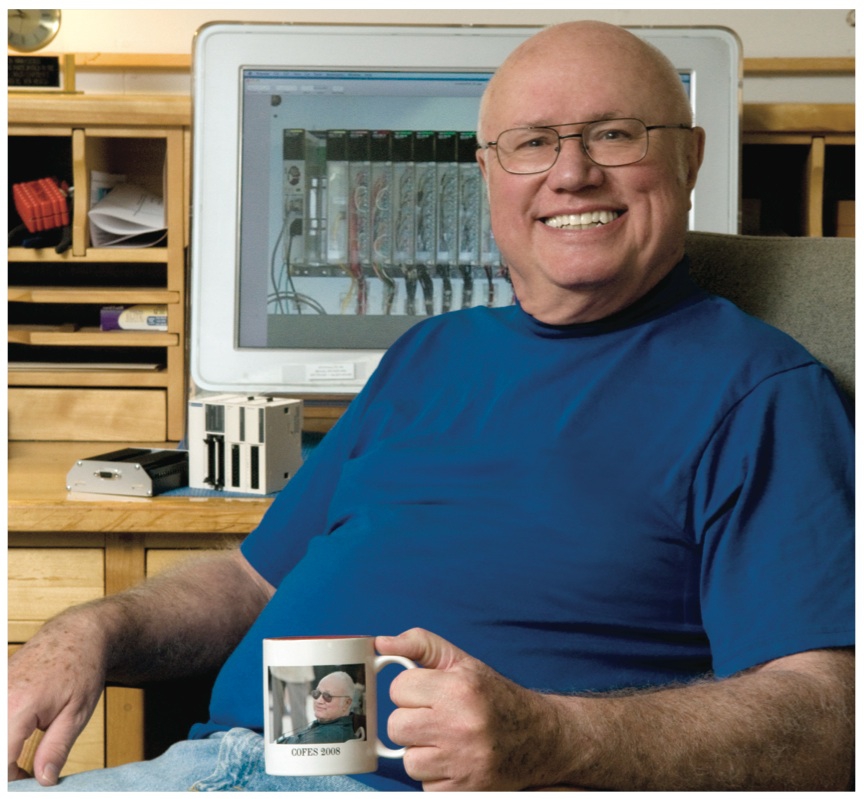 Time for a photo flashback! We pulled this classic Dick Morley shot from the Manufacturing AUTOMATION vault. This photo was originally published in our June 2008 issue for the article

Apr. 18, 2016 – Legend. Visionary. Innovator. These are the words several of our regular Manufacturing AUTOMATION contributors used to describe Richard E. (“Dick”) Morley — quite fitting descriptors when you think of a gentleman who has more than 20 United States and foreign patents to his name.

Famously known as the father of the programmable logic controller (PLC), it is Morley who, in 1968, led the team to develop what is considered one of the most important inventions in manufacturing. The PLC, which allows us to control processes through digital and analog input-output arrangements in real time, has greatly changed the way we automate our factories. Since its inception nearly five decades ago, the PLC is still used in countless manufacturing facilities worldwide. While you may be hard-pressed to find someone in the business who doesn’t know what the PLC is today, how many of us know about the iconic man behind it?

“The first impression I had of Dick Morley was that he was as close to God as you could get,” says Jeremy Pollard, who has known Morley for about 25 years. “And when I first met him, ‘God,’ he all of a sudden became normal, if that makes any sense. He transformed into a very normal, sensitive and caring individual. He will tell you how smart he is without telling you how smart he is. Yes, he’s got all these patents and he’ll tell you about them, but he’s not throwing it in your face.”

Entrepreneurial spirit
Along with the PLC, Morley’s patents include the anti-lock braking system (ABS brakes), the computer floppy disk, the parallel inference machine, the handheld terminal, personal rapid transit, and magnetic thin film, among many others.

Winner of the Business Week Entrepreneur of the Year Award and namesake of the Richard E. Morley Society of Manufacturing Engineers Outstanding Young Manufacturing Engineer Award, Morley is an engineer, accredited machinist and Massachusetts Institute of Technology (MIT) dropout who has helped launch and counsel more than 100 companies throughout his career.

“Dick is the kind of guy that thinks of things long before they become mainstream,” says David McPhail, president and CEO of Memex, who asked Morley to join the Burlington, Ont.-based company’s board of directors in November 2013.

“When you’ve got [that many] patents to your name, you’re definitely a visionary,” he continues. “What the PLC has done for the industry is foster the third industrial revolution in my opinion. I don’t believe the level of industrial integration and automation that we see today would be possible without it. If you look at all modern manufacturing done today, anywhere in the world, you will see a whole line of equipment that, for the most part, runs unattended because it’s run by a PLC. It has essentially replaced panels and panels and panels of relays.”

He recalls the first time he went to meet Morley at the Barn, the office location that Morley worked out of for years.

“I went there to meet him for an hour and six hours later, we were still talking. I looked down at my watch and I couldn’t believe the time. I thought that my watch had malfunctioned,” McPhail says chuckling. He says Morley was able to ask him questions that made him think different about his company’s technology and place in the market. “He basically challenged everything I said in a way that was very humble, very simple. It just made me think differently.”

Sometimes, Morley would have insomnia and continued to work late into the night, reminisces Jim Pinto. “Dick Morley and I have been friends for a hundred years. At least, that’s the way he would describe it. During a visit, I stayed in the fairly well-furnished, cozy room upstairs. I remember seeing the light on in the middle of the night and coming down to find Dick fiddling with his FatMac — a well-endowed Apple Mac computer. We talked ’til early morning and the ideas flowed.”

Father of more than the PLC
Morley is more than just a father to the PLC though, he is also a father to dozens of children. Over the course of their marriage, Morley and his late wife Shirley took in about 40 foster children, in addition to having their own biological children.

“You look at all the work [he has] done, he has a list of accomplishments a mile long and he still has time to raise 40 foster children,” says McPhail, adding that he believes the true measure of a person’s character is how one lives their personal life.

“I mean, 40 lives have changed on the humanitarian side as a result of [their] efforts. If I had to pick of all of Dick’s accomplishments which one I would be the proudest of, and this is a tough one, it would be the 40 foster children that he raised,” he says. “So many people get caught up in their career but for Dick to have the time and to give back this way, I don’t know what to say about it. I’m speechless.”

“How many people do you know that will take in youth and young adults at risk from the judicial system and foster them for weeks, months and years at a time?” asks Pollard.

Almost 50 years later
The invention of the PLC, in Pollard’s mind, is “without a doubt” at the top of the list of manufacturing milestones. “The PLC was very disruptive, probably the most disruptive thing that has ever hit the floor running relative to industry,” he says.

“There are so many spinoffs from it, not only in terms of the software mindset, but everybody started to think and wonder about [the future of technology].

Pinto fondly thinks of Morley as “the peripatetic inventor, the dreamer.” “[There is a] famous Morley line, ‘80 per cent of the inventions I predict never happen; I don’t know which.’ There were many instances that Dick and I were co-speakers at ISA and other events. Mostly, he brainstormed out loud, to the delight and sometimes mystification, of his audience. I followed, as the ‘straight man,’ the marketer and businessman, providing interpretations.”

But what separates Morley from the majority of inventors out there, says McPhail, is his ability to follow through. “I think Dick is the kind of guy that can inspire people to come together and get the most out of that idea — foster it, nurture it and ultimately deliver it — which I think can be a struggle for some entrepreneurs,” he says. “A lot of people come up with great ideas but then they don’t execute them and they never see the light of day.”

For many years, Morley was a loyal contributor of Manufacturing AUTOMATION through his Distorted Realities column until he decided to take a very well-deserved break from regular submissions last fall. On behalf of the entire team, I would like to extend a very heartfelt and sincere thank-you to Mr. Dick Morley for his wise words, insightful anecdotes, and as you read earlier, the countless ways he has greatly developed and advanced our industry.

***
The Man, the legend, the realist
By Heather Angus-Lee

“What business are you in?… No, no – what are you really selling?”

Dick Morley’s tenacious prodding of people at every trade show and conference he attended — at which he was usually honoured with some tribute — personified his trademark curiosity and delight in turning topics on their head. If they said, “I sell networking gateways,” he’d say, “Wrong, you sell relief from bosses hanging over you demanding why the downtime!”

Circa 1997, I was the new editor of Manufacturing AUTOMATION, and I had big ambitions for the publication. My first work trip state-side, it didn’t take long to learn of the Mighty Morley, and I immediately set my sights on snagging him as a writer. Of course, he’d never heard of our Canadian magazine…

Never one to refute logic, Dick began an almost 20-year relationship with Manufacturing AUTOMATION. Over the years we worked together on his delightfully disruptive columns, my favourite comment from him was: “Pig’s ear, Angus…” referring to the adage of “turning a sow’s ear into a silk purse” — a high compliment on editing, indeed, from the author of several esteemed books.

I visited The Barn, his work/life hangout, on a few occasions, deep in the woods of New Hampshire (so deep I regretted not leaving breadcrumbs on my exit, truly a twisted, forested labyrinth of which he was proud). His lovely wife, Shirley (who passed away in 2012), and their artist daughter, Pat, took me whale-watching. We barbecued and swapped stories, with Dick entertaining a host of entrepreneurs (he was a renown angel investor) alongside his brilliant bud- dies, beers in hand, at his annual Geek Day.

I let our friendship expire, and I regret it. I talked with Dick in Feb. 2016, the first time in many years. Turning 84 this year, he lives in a N.H. retirement community. On being considered a “legend” in the industry, Dick told me in this conversation that “being called a legend, that doesn’t matter much to us folks,” referring to his low-key state mates. He added, “inventors don’t make any money, you know.”

Dick always struck me as a compelling combination of ego and down-home humility. He knew he was a giant of the industry, and he liked the recognition a lot. He also wanted you to know he was a country hick, a devoted husband, and just a guy out for a good time. He is all those things, and so much more.

Heather Angus-Lee is a former editor of Manufacturing AUTOMATION, who still writes about automation for clients of her business (coacheditor.com). Today she ghost-writes and edits books about technology, science, and whatever else catches her fancy.