May 6, 2016  by Manufacturing AUTOMATION 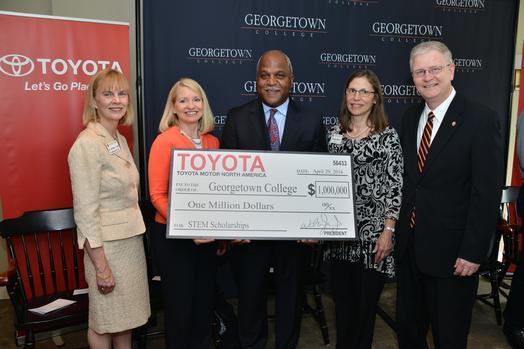 May 6, 2016 – Georgetown College in Georgetown, Ky., is the latest educational institution to receive a grant from Toyota Motor North America. Announced last week, the automaker says the $1 million grant will directly support education programs for students preparing for careers in the fields of science, technology, engineering and math (STEM), with an emphasis on future educators who will teach in a STEM-focused field.

The college neighbours Toyota’s largest manufacturing plant, Toyota Motor Manufacturing Kentucky (TMMK). Over the last 30 years, Toyota has partnered with Georgetown College on other scholarship initiatives, giving more than $1.5 million prior to the $1 million grant.

“At Toyota, we believe investing in education is an investment in our future, for our community and our company,” said Wil James, president of TMMK. “Partnering with institutions like Georgetown College to advance STEM opportunities won’t just have an impact on how we make cars in the future; we believe it will help shape the future of mobility for our society.”

Toyota says it is currently one of Kentucky’s largest employers with around 8,000 full-time employees. In 2017, the plant will become the home of Toyota’s North American production engineering headquarters, which will bring 600 engineers under roof in Georgetown.

In the 2016-2017 academic year, Georgetown College will have an estimated 350 students pursuing degrees in STEM-focused fields. With support from Toyota’s grant, approximately $6 million will be awarded in direct aid scholarship funding to students in these fields of study, says the college.

“This generous gift from Toyota Motor North America affirms and will enable Georgetown College to strengthen its commitment to STEM programs already underway,” said the school’s president, Dr. M. Dwaine Greene. “I am thrilled that, with keen insight, Toyota has seen in Georgetown College not only an institution with an excellent reputation in the liberal arts, but an institution which also does superb work in the sciences and other STEM fields. We are grateful to Toyota for being part of the vision and future of Georgetown College.”